by Contributor
in Community, In Memoriam, Latest, News, Top Stories
0 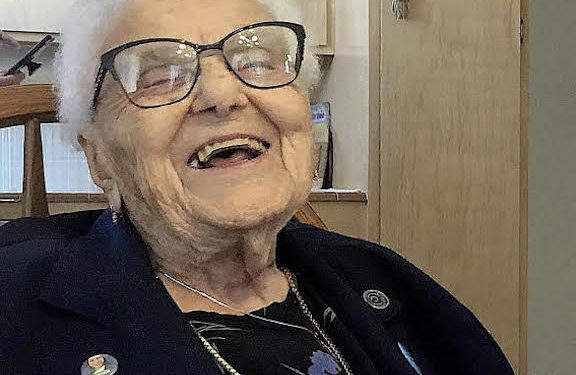 BY GARO MIRIGIAN AND SONIA KOUJAKIAN

Lucy Mirigian, an active member of the San Francisco Bay Area Armenian community, including in organizations such as the Armenian Relief Society, passed away on February 12. She was 114.

Lucy was born in Armenia on August 15, 1906, the youngest of five children of Kevork and Altoon Sarkisian. While still very young, she contracted small pox. The “pox” completely destroyed her right eye, requiring Lucy to spend the rest of her life with one artificial eye. From even that young age, Lucy never considered herself disabled or let this tragedy get her down. Instead, she led a “limitless” life, attending college, learning to drive, working for years for the U.S. Treasury Department, being an active community member, becoming a voracious reader, a lover of handicrafts, and a world traveler and organizer.

While she was still very young, Lucy and her family left everything they owned, escaped from Turkish-held Armenia just prior to the genocides, and relocated in Fresno. In Fresno, Lucy’s father and grandfather (a parish priest in Armenia) helped build the Holy Trinity Armenian Church.

At age 15, Lucy contracted typhoid and lost a year of her schooling. Undeterred, she returned to school after her recovery and was able to complete high school and secretarial school. Lucy, then, ended up teaching Sunday School and Armenian School, and started clubs for the young people of the Fresno Armenian church community.

Lucy married Ashod Mirigian in 1936, and moved to the Bay Area, ultimately settling in San Francisco. Lucy immediately became active in the San Francisco Armenian community, again teaching Sunday School and Armenian School, as well as joining the Ladies Auxiliary and ARS (Armenian Relief Society). In fact, when the United Nations was being formed in San Francisco, Lucy joined George Mardikian’s group of volunteer ladies to help feed the delegates during their planning meetings at the Opera House.

Lucy and Ashod became charter members of the Armenian American Citizens League (AACL), an organization formed to help the displaced persons who were flooding into the U.S. from war-torn Armenia.

Lucy and Ashod had two children – Sonia (married to Hagop Koujakian), and Garo (married to Aida Petrossian). Lucy enjoyed helping her children grow by being active in PTA and other school activities. She encouraged music lessons and education. As a result, her children learned violin and piano, and both became career educators.

Once her children were a little independent, Lucy began working for the Social Security Administration. Upon her retirement, she began traveling and ultimately traveled around the world. After joining AARP, Lucy enjoyed their club activities, and eventually became their local tour director – organizing numerous gambling trips and cruises for fellow seniors.

Lucy passed quietly in her sleep on Friday morning, February 12, 2021. A family graveside service will be held in Fresno at the Ararat Cemetery.

In lieu of flowers, donations may be made to a charity of your choice or her favorite organizations: St Gregory Armenian Church, Nor-Cal Senior Services, Armenian Relief Society, and the Armenian American Citizen’s League Scholarship Fund.