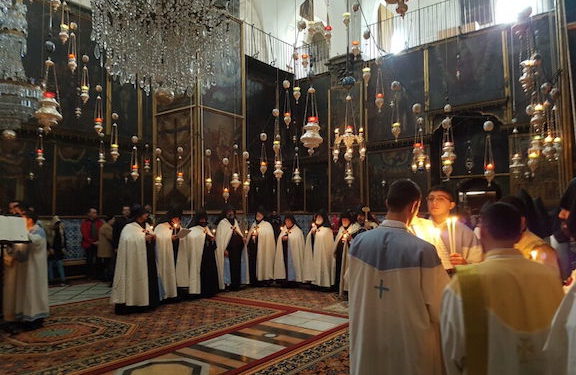 The strategic piece of land is located on Mount Zion, which has been part of the Armenian Quarter since the 14th century, is adjacent to the seminary and the Patriarchate compound.

“Its loss would be a huge blow to the 1,600-year Armenian presence in the Holy City. In the announcement, the clergymen demanded the Patriarch withdraw his signature from the contract,” said keghart.org in reporting the announcement.

Below is the text of the announcement by the 12 priests.

Through this correspondence, we, the undersigned members of St. James Brotherhood of Jerusalem, make public our disagreement with the transaction to build a “Seven Star” hotel in the “Goveroun Bardez” which was signed on July 8, 2021 by the Armenian Patriarch of Jerusalem Archbishop Nourhan Manougian, Grand Sacristan Archbishop Sevan Gharibian, and Director of the Real Estate Department Very Rev. Fr. Baret Yeretsian.

The agreement on the “Goveroun Bardez” was signed not only by the Patriarch and the Grand Sacristan, but also by the director of the real estate department, which is contrary to the above article. The real estate director is never allowed to sign twenty-six to forty-nine-year contracts, let alone a 99-year contract.

After signing the above agreement, Director of Real Estate Department Very Rev. Fr. Baret Yeretsian, without the prior knowledge of the Patriarch, posted several statements on the Patriarchate’s Facebook page in which he asserted that the Holy Synod and the General Assembly had given their consent and blessing to the transaction.

The construction of a hotel near the monastery, the Patriarchate, and the Theological Seminary will also create immense inconvenience and disrupt the normal life, activities, and the peace of the Patriarchate and the seminary, greatly jeopardizing the fulfillment of our mission in the future.

In conclusion, we would like to emphasize that the Holy See of Jerusalem is a pan-Armenian asset, and it has been under the attention and care of all Armenians for many centuries. The selfless sacrifices of the clergy of the Holy See, as well as that of the entire Armenian people, (with their moral and financial support), contribute to its continued existence and preservation. Therefore, this sacred heritage must be handled with the utmost care and responsibility, always upholding the charter of the Holy See so as not to undermine its centuries’-old course and pass it on to future generations.

Armenia Says it is Ready for Border Demarcation Process