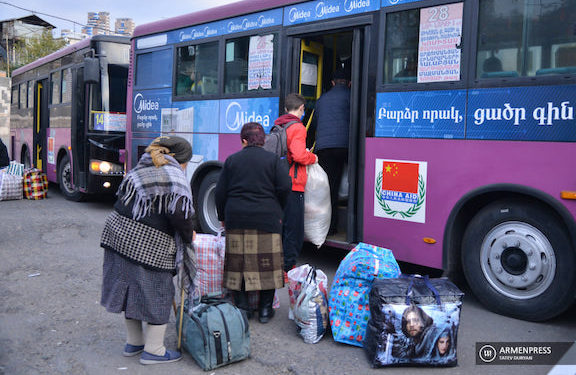 YEREVAN (Azatutyun.am)—Nagorno-Karabakh has retained the vast majority of its population after last year’s Armenian-Azerbaijani war, a senior official in Stepanakert insisted on Tuesday.

She said her estimate is accurate because it is based on the number of beneficiaries of socioeconomic and educational programs implemented by the Karabakh authorities.

Karabakh had an estimated 150,000 residents, virtually all of them ethnic Armenians, before the six-week war with Azerbaijan that broke out in September 2020. According to Karabakh officials, at least 90,000 local civilians fled their homes and took refuge in Armenia during the fierce fighting stopped by a Russian-brokered ceasefire in November.

Most of them reportedly returned home after the ceasefire. Russian peacekeeping forces claimed to have escorted more than 50,000 refugees back to Karabakh in convoys of buses. In Tandilian’s words, tens of thousands of others returned home in private cars.

According to the Armenian Ministry of Labor and Social Affairs, more than 30,000 Karabakh Armenian refugees remained in Armenia as of February. Most of them used to live in Karabakh’s southern Hadrut district and the town of Shushi captured by Azerbaijani forces as well as districts around the Soviet-era Nagorno-Karabakh Autonomous Oblast retaken by Baku during and after the hostilities.

Thousands of other former Hadrut and Shushi residents have moved to other parts of Karabakh despite a lack of adequate housing there.

Tandilyan said that the Karabakh authorities have already launched “large-scale” housing construction for them. “The government plans to provide the displaced people with new homes over the next three years,” added the official.

Aliyev made the population claim last week as he again said that Azerbaijan’s victory in the war put an end to the Karabakh conflict. He said Armenian-Azerbaijani peace talks on Karabakh’s status make no sense also because only 25,000 people live in the territory at present.

In a joint statement released in April, the U.S., Russian and French mediators co-heading the OSCE Minsk Group called on Armenia and Azerbaijan to resume negotiations on a “comprehensive and sustainable” settlement based on their pre-war peace proposals.