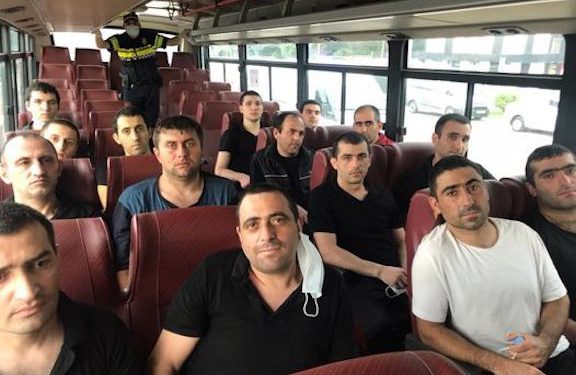 Azerbaijan has released 15 Armenian prisoners of war, said Acting Prime Minister Nikol Pashinyan, who also announced that Armenia has handed over maps of minefields in areas that are currently being controlled by Azerbaijan.

Pashinyan made the announcement during a campaign stop in the Gegharkunik Province, which has become an epicenter of a month-long border standoff after Azerbaijani forces breached Armenia’s sovereign border on May 12, with their troops advancing into Gegharkunik and Syunik provinces.

Secretary of State Antony Blinken in a statement welcomed the release of the detainees “and their return to their families.”

“We also welcome Armenia’s decision to provide Azerbaijan with important information that will facilitate humanitarian de-mining and avoid future casualties,” said Blinken in his statement Saturday.

Pashinyan confirmed that Armenia had handed over maps of some minefields to the Azerbaijan. “I want to say that we have not exchanged maps for captives. We have responded to a step with a step,” Pashinyan stressed in a Facebook post detailing process by which the detainees were released.

Neither Blinken or Pashinyan spoke about the fate of the remaining reported 200 Armenian POWs and captives being held in Azerbaijan, nor did they acknowledge that three POWs have been put on trial in Baku illegally.

After posting a photo of the detainees in a bus headed to Armenia, Pashinyan said that Georgia, the U.S. and the European Union played a role in ensuring the return of the 15 POWs from Azerbaijani captivity.

“Two days ago I had a meeting with acting U.S. Deputy Assistant Secretary of State Philip Reeker, who said he had been instructed by Secretary of State Antony Blinken to ensure breakthrough in the return of Armenian captives,” Pashinyan explained in a Facebook post.

Pashinyan explained that Reeker indicated that the U.S. would be willing to get involved if Armenian was ready to cooperate.

“I said we are ready,” said Pashinyan. “And today, as a result of these efforts, and the efforts of our Georgian colleagues, namely Prime Minister Irakli Gharibashvili, our EU parters, 15 of our captured brothers are returning to Armenia.”

He also said that the detainees “crossed the Red Bridge to Georgia and headed for Armenia through Bagratashen checkpoint. They will now go through medical exams.”

“We are grateful to Prime Minister Irakli Garibashvili and the Government of Georgia for the essential role Georgia played in facilitating these steps, which bring the people of the region closer to the peaceful and prosperous future they deserve,” Blinken said in his statement on Saturday.

“The United States is pleased to support these steps and hopes they will lay the groundwork for additional cooperation. We continue to call for the return of all detainees and stand ready to assist the countries of the region in their efforts to continue cooperation and resolve outstanding issues between them,” added Blinken.

“We also continue to urge Armenia and Azerbaijan to reengage in substantive negotiations under the auspices of the OSCE Minsk Group Co-Chairs to negotiate a comprehensive political settlement to the conflict,” he concluded.