8 Amendments Filed in Congress to Hold Azerbaijan and Turkey Accountable 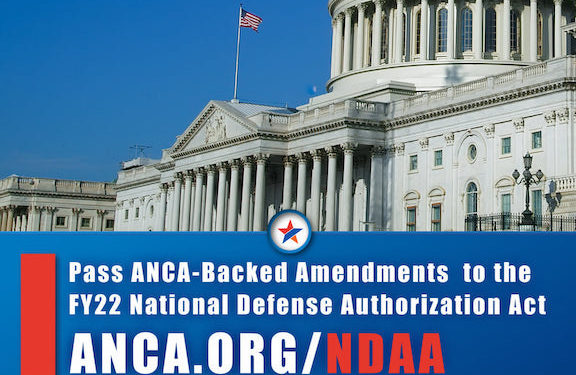 WASHINGTON—U.S. Representatives are leading the charge to block U.S. arms and aid to Azerbaijan, as part of a series of eight pro-Artsakh/Armenia amendments to the Fiscal Year 2022 National Defense Authorization Act (H.R.4350) filed this week, reported the Armenian National Committee of America.  Other amendments demand Azerbaijan’s immediate release of Armenian POWs; call for an investigation of the use of U.S. technology in Turkish drones used against Artsakh and Armenia; explore ways to expand U.S. aid to Artsakh; and designate Turkey’s “Grey Wolves” as a terrorist group.

The ANCA is leading a nationwide grassroots effort to secure cosponsors for each of the amendments, which are set to be considered by the House Rules Committee as early as Monday, September 20th. The full U.S. House will have the opportunity to vote on each of the amendments ruled “in order” during consideration of H.R.4350. Amendments with strong, bipartisan backing are generally considered more favorably by Rules Committee members.

“We thank Representatives Cardenas, Pallone, Schiff, Sherman, Speier, Titus, and Valadao for offering their Congressional colleagues a long-overdue opportunity for an up-or-down vote on zeroing out all U.S. military aid to oil-rich Azerbaijan and other key pro-peace initiatives,” said Aram Hamparian, Executive Director of the ANCA. “In the wake of Azerbaijan’s ethnic cleansing last year of 100,000+ indigenous Armenians from Artsakh – amid Aliyev’s ongoing invasion and occupation of Armenian territory – the Congress must act in a bipartisan manner to hold both Azerbaijan and Turkey accountable for their violent anti-Armenian aggression.”

A brief overview of each of the eight amendments is presented below along with their lead sponsors, listed as numbered by the House Rules Committee:

Amendment #52 – Rep. Brad Sherman (D-CA): Blocks Federal funds from being obligated or expended to provide any United States military or security assistance or cooperation to the defense or security forces of the Government of Azerbaijan.

Amendment #123 – Rep. Frank Pallone (D-NJ): Requires a report from the Secretary of Defense, in collaboration with the Secretary of State, addressing allegations that some units of foreign countries that have participated in security cooperation programs under section 333 of title 10, U.S.C. may have also committed gross violations of internationally recognized human rights before or while receiving U.S. security assistance. This report would also includes recommendations to improve human rights training and additional measures that can be adopted to prevent these types of violations.

Amendment #408 – Rep. David Valadao (R-CA) / Rep. Brad Sherman (D-CA): Requires a report within 180 days of all US humanitarian and developmental assistance programs in Nagorno Karabakh, including an analysis of the effectiveness of such programs and any plans for future assistance.

Amendment #560 – Rep. Adam Schiff (D-CA) / Rep. Tony Cardenas (D-CA): Expresses the Sense of Congress that the government of Azerbaijan should immediately return all Armenian prisoners of war and captured civilians. It also urges the Administration to engage with Azerbaijani authorities, including through the OSCE Minsk Group, to make clear the importance of adhering to their obligations under the November 9 statement and international law to immediately release all prisoners of war and captured civilians.

Amendment #579 – Rep. Dina Titus (D-NV): Requires a report by the Secretary of State on the activities of the Grey Wolves organization (AKA Bozkurtlar & Ülkü Ocaklari) undertaken against U.S. interests, allies, and international partners, including a review of the criteria met for designation as a foreign terrorist organization.

Amendment #586 – Rep. Tony Cardenas (D-CA): Requires a report from the Secretary of Defense on U.S. parts found in Turkish Bayraktar drones deployed by Azerbaijan against Nagorno Karabakh and an assessment of potential violations of Arms Export Control Act.

The full text of the ANCA’s legislative briefing on NDAA amendments cutting U.S. military aid to Azerbaijan, circulated to Congressional offices earlier today, is provided below.

The full U.S. House – following up on passage this July of the Pallone Amendment to the FY22 foreign aid bill, prohibiting International Military Education and Training (IMET) and Foreign Military Financing (FMF) aid to Azerbaijan – should amend the FY22 National Defense Authorization Act to zero-out all Section 333 (Capacity Building) and other military assistance to the Aliyev regime.

Key Points:
— Amid so many pressing needs here at home, Congress should not be sending U.S. tax dollars to subsidize the oil-rich regime of Azerbaijani dictator Ilham Aliyev.

— In the wake of Azerbaijan’s ethnic cleansing of 100,000+ indigenous Armenians from Artsakh (Nagorno Karabakh) –amid Azerbaijan’s ongoing invasion and occupation of Armenian territory – not a single U.S. tax-dollar should be sent to the Aliyev government.

— The $120,000,000 in U.S. military aid sent to Azerbaijan emboldened its leaders to ethnically-cleanse Artsakh last September and encourages them to continue invading and occupying Armenian land today.

— Now, more than ever, the Congress must act in a bipartisan manner to maintain the spirit and the letter of Section 907 of the Freedom Support Act, a longstanding provision of law aimed at holding Azerbaijan accountable for its relentless aggression against Armenians.

The Big Picture:
— Sending U.S. military aid to human rights abusers like Azerbaijan not only recklessly enables Baku’s aggression, it undermines the Administration’s commitment to human rights as a core tenet of our foreign policy.

— The cost of green-lighting military aid to Azerbaijan extend well beyond the South Caucasus. Abetting one of the world’s most authoritarian regimes during a regional humanitarian and security crisis signals that the U.S. is willing to abandon our values for the sake of oil interests.

— U.S. recognition of the Armenian Genocide comes with the responsibilities, among them not sending arms or aid to states – like Azerbaijan – that seek to complete this crime.

As a candidate, President Biden called on the United States to enforce Section 907 of the FREEDOM SUPPORT ACT and “stop the flow of military equipment to Azerbaijan.”

This law, as originally enacted in 1992 with strong bipartisan support, restricts U.S. assistance to the Government of Azerbaijan until the President determines, and so reports to the Congress, that the Government of Azerbaijan is taking demonstrable steps to cease all blockades and other offensive uses of force against Armenia and Nagorno-Karabakh. It has been waived – under expanded authority granted by Congress in 2001 – during the Bush, Obama, Trump, and Biden Administrations.

Azerbaijan to Connect to Nakhichevan Through Iran