A Sea of Hope for Kids with Disabilities in Armenia 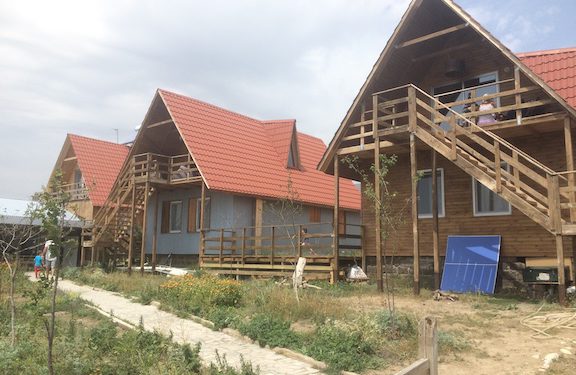 Lake Sevan is nestled in the north-eastern part of Armenia. It is the most visited tourist destination in the country. The length of the lake is 74 km, or 46 miles. It is one of the largest high-altitude, freshwater lakes in the whole world and is referred to as the Pearl of Armenia, the Jewel of Armenia, or the Blue Eye of Armenia.

I was invited to spend a night at a lodging by the shores of Lake Sevan, next to Artanish village, on the east side of the lake. This little-known place, which was built in 2012, has a unique purpose — it’s a campsite, called Armenian Camp, that specifically serves kids with disabilities. During the summer months, the camp opens their doors to able-bodied guests, as well.

Armenia is a developing country, so the idea of having a camp for kids with disabilities sounded intriguing to me. To learn more about it, I had a chat with Varduhi Aramyan, who is the camp manager.

During our conversation, Varduhi told me that Armenian Camp was the brainchild of Samvel Rostomyan. If I wanted to learn more about the camp, she recommended I speak to Rostomyan himself, and to contact Rouben Galichian, who is the camp’s main sponsor.

The physical and operational aspects of the camp are straightforward. The camp is situated a few hundred feet away from the shore. However, there’s a special wooden trail that leads to the water to help make the lake accessible to those with wheelchairs or physical disabilities.

Although the camp is designed for children with disabilities, the camp accepts everyone during the summer. There are three chalet-type buildings—10 rooms which can accommodate 34 guests. There is also a dining hall, which can seat 50 vistiors. Breakfast, lunch, and dinner are included.

Near the lake, there is a woodsy campground area where, for a small fee, visitors can set up tents. There’s also a designated area to build and sit around a bonfire.

Varduhi also mentioned that, during the summer, kids from the neighboring village of Artanish are given swimming lessons. Non-guests may also enjoy the waterfront by paying two dollars per person, per day. “This year during the month of September, the camp will host soldiers of the Artsakh War. Each week, 25 soldiers will use the facility,” said Varduhi.

Samvel Rostomyan, the camp’s founder, has been a sports enthusiast since early childhood. His interest in water sports lead him explore the possibility of becoming a sailor. For a period of time, Samvel worked as a sailor on different ships from different countries.

When he returned to Armenia, he decided to form an Armenian youth sailing team. In 1994, he was invited to participate in the first-ever World Disabled Sailing Championship. After scouting for 14 and15-year-old boys with disabilities, he was able to build a team of boys who had become disabled in the Spitak earthquake of 1988.

After three months of intense training and accomplishing the difficult task of getting funds for the trip, Samvel was miraculously able to take the kids to the championship, where they finished 11th out of 20 teams. Two years later, he took a team of boys to the 1996 Summer Paralympics, where they, again, participated in the sailing competition. Since then, the team has participated in every subsequent Paralympics.

The success of the Paralympics team gave Samvel the idea to run a summer camp, by the shores of Lake Sevan, for children with disabilities. One of the main purposes of the camp was to integrate each child’s condition into daily family life and to teach them how to do daily chores.

When he first opened the camp, Samvel rented different campsites. The operating cost of the summer camps was pretty steep. He was receiving funding from different sources, until he met Rouben Galichian, an executive trustee of Friends of Armenia—UK, in 2004. Galichian was able to procure the necessary funds. The board of the FoA agreed to provide $10,000, each year, for one month’s operational cost of the camp, which served between 60 to 70 kids with disabilities. For seven years, from 2005 to 2012, Friends of Armenia doled out the committed amount of $10,000 to Armenian Camp.

In 2012, Samvel, by chance, came across three porta-cabins that were brought from England. Friends of Armenia agreed to pay the sum of $20,000 for the purchase of the cabins. Armenian Camp installed them by the shores of Lake Sevan, where they already had a campsite. A few years later, Samvel was able to add a second story to the tops of the cabins, which made them look like little chalets.

I should add that, when winter sets in, Samvel doesn’t sit idle. He trains kids who are blind to ski or play “goal-ball.”

I will conclude this story with a quick sidebar about my first trip to Armenia. My husband and I traveled there for the first time ten years after Armenia declared its independence from the Soviet Union. It was July of 2001.

This year marks 20 years since I first visited Yerevan. It was late at night when we arrived at the “old” Zvartnotz airport in Yerevan. The dimly lit airport looked deserted. Like Soviet-era government buildings in movie scenes – it was cold, unimpressive, and outdated. The interior walls, with grayish and pinkish marble veins, looked very tired and it gave us an inkling of what to expect upon entering Yerevan.

As you may know, during Soviet times, there was a shortage of consumer goods. In 2001, ten years after the reforms of the Soviet Union and the fall of the Communist party, the country, little by little, was emerging from that era. Necessities such as food, clothing, and hygienic products were becoming more readily available.

The Armenia of those days was a far cry from the Armenia of today. The economy of the country has undergone a profound transformation, largely due to the generosity of a number of Armenians from the Diaspora. Many have created charity organizations to improve the lives of ordinary people, especially in rural areas.

In a previous column, I’ve mentioned some of these charities and their functions. Below are a few of these organizations:

It has been my good fortune to closely witness the operation of these three organizations and I’ve learned how they’ve affected the lives of families and children in Armenia by pouring millions of dollars into the country and creating programs to help support and uplift communities. All this has brought us renewed hope of shaping the future of Armenia.