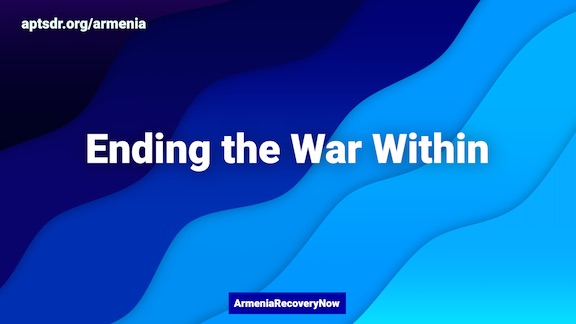 “Ending the War Within"

A new documentary, “Ending the War Within,” brings to life the moving stories of Armenians who have found relief from Post-Traumatic Stress Disorder and associated conditions of depression, anxiety, and insomnia resulting from the Artsakh war.

Award-winning filmmaker Tigran Nersisian was drawn to create the new film when he realized that practicing the Transcendental Meditation technique had relieved his own depression and unleashed his creative potential.

Inspired by the humanitarian project ArmeniaRecoveryNow, “Ending the War Within” is a powerful look into the lives of real people who have survived the trauma of war by practicing a simple, evidence-based technique that can ease suffering and pave the way to a healthier homeland

Since early 2021, ArmeniaRecoveryNow has been teaching Transcendental Meditation to victims of the Artsakh war—veterans, displaced persons, children, caregivers. The humanitarian program was developed through the U.S. non-profit organization Alliance for PTSD Recovery.

The concept ofArmeniaRecoveryNow traces its roots back to 1988, when a team of TM teachers brought relief to 30,000 people in earthquake-ravaged areas and Yerevan from 1989 to 1990. Since then, certified teachers have continued to teach TM there through an Armenian non-profit educational foundation.

“I had insomnia, difficulty concentrating, negative thinking, but after I began practicing TM, these issues started to disappear. You start thinking more effectively. With a clear mind, you can find solutions to a lot of problems,” said Nicolay, a veteran of the Artsakh War, in “Ending the War Within.”

Tigran Nersisian is an award-winning film director based in Los Angeles. Born in Yerevan in 1995, he moved to Russia at the age of five. He grew up aspiring to make films but could not realize his dream in Russia. Once he came to the United States, 17-year-old Tigran learned English and began working on projects to fulfill his goals. He was very fortunate to be accepted in the undergraduate film program at the University of California, Los Angeles.

Tigran’s breakthrough came with his thesis film “Out of Mind” (2019), which was featured at the Pomegranate Film Festival and earned awards in numerous international festivals. It tells the story of a young Armenian’s intense struggle with depression and anxiety disorder, worsened by the stigma of mental illness in his family and community. To learn more about this important film, visit the “Out of Mind” Facebook page.

Mental health is a major focus in Tigran’s life and work, having struggled with these same issues, and the film was his way to advocate for better resources. “People would come to me and say that these were the same conversations they’d had with their family,” said Tigran. “As Armenians we have quite a conservative community that is slowly opening up to discussions of mental health and other very difficult topics,” he added.

Since then, Tigran’s creative work has branched out to include narrative films, documentaries, and art films. His company Byulor Films keeps him very busy, yet he still devotes time to work alone on “passion projects,” his more personal and experimental work. Mental health is explored once again in his short film “The Pain,” about the difficulty of expressing one’s feelings about the 2020 Artsakh war while living in the diaspora.

Tigran believes much of his success comes from his Transcendental Meditation practice, which he discovered by reading director David Lynch’s book, “Catching the Big Fish,” about the immense creative benefits that Lynch experienced from the practice of meditation. “What really attracted me was that it made [Lynch] so much more creative, it opened up an unlimited resource of creative energy,” he said. Tigran has practiced TM for two years now.

For Tigran, TM brought immediate relief from anxiety and released his creative energies, enabling him to handle stress, manage multiple projects, and take risks more confidently. He got busier yet life became more enjoyable: “I had more room in my life to think and do big projects. I’m so much more productive now, and I’m naturally more organized,” he noted.

“When you think about these benefits, after everything that has happened in Armenia, where life is getting harder and harder, we can give them this effortless technique that doesn’t require any resources, just taking time to meditate twice a day,” said Tigran. “Thinking long term, what if 10 percent of Armenians there can meditate? Solutions will be easier to see. The powerful and free future of Armenia that we dream of could be realized if we could make people stronger.”

According to Tigran, through centuries of conflict to the current war, “Armenians have experienced cyclic trauma for generations. We are very stressed as a nation. But there is always a way to break the cycle. Not to forget what happened, but we don’t want to let trauma exhaust us. Look at Armenians outside of Armenia, we are very successful, we are flourishing, blooming. So much is determined by the mind – the human mind is very powerful. Despite Armenia’s very difficult geopolitical situation and economics, we can make this mental health change and become healthy as a nation. That is what inspired me to do this project.”

When he learned that ArmeniaRecoveryNow needed to raise funds, Tigran volunteered to help, using his own resources to create the new film. Having tried other therapies, Tigran knew that traditional psychiatry and medications were not the answer, and that TM’s simple technique deserved to be more widely recognized.

The film is comprised of short interviews representing many perspectives—testimonials from ordinary people from different walks of life in Armenia who have seen the benefits of TM in their own lives. Also included are insights from the teachers and translators who have made TM available to the people of Armenia, and a look at the scientific research behind TM. Interviews took place here in the U.S. and via Zoom in Armenia, and the final cut is subtitled to help the diaspora understand the deeply personal impact of this work in Armenia.

“We have sincere emotional videos from real people who have been meditating,” said Tigran. “When you listen to them you see how much they have been dealing with, heavy stuff such as war that we don’t deal with here. My depression was hell for me, but I can’t imagine what PTSD feels like. These individuals do, and if there’s something that can help them, that we can capture on video, then we can show people how their donations can make others feel better about their daily lives.”

“There have been many recent fundraisers for Armenia since the war, but this is one of the most important, because the impact will be long term. TM gives people the ability to become more independent, stronger individuals who can determine how to further improve their lives,” he added.

“A new stage of my life began after I started practicing TM. I could feel it day after day, little by little, to a point where my co-workers would tell me that I became kinder and happier,” said Yura, from Center of the Blind, in “Ending the War Within.”

Transcendental Meditation is a simple, natural, easily learned technique that is practiced by more than ten million people around the world in all walks of life. It is done twice a day for twenty minutes sitting comfortably. It has no religious connotations and does not impose on one’s personal beliefs or lifestyle.

Through the David Lynch Foundation, a non-profit 501(c)(3) organization based in the United States, TM has brought relief to more than 500,000 adults and children. Since 2005, the Foundation has focused on teaching at-risk populations: veterans with PTSD and their families, inner city students, and women and children who have survived violence and abuse. The Lynch Foundation is one of several international organizations supporting the program in Armenia.

Transcendental Meditation is quickly becoming the gold standard to reverse the devastating effects of PTSD.

Fourteen peer-reviewed scientific studies attest to TM’s ability to rapidly relieve the symptoms of stress-induced conditions among veterans, displaced persons, first responders, and victims of violence. Studies with military veterans show that TM is at least as effective as the most common traditional therapies, often bringing relief within the first month of practice without the need to revisit one’s trauma or take medication.

Over 400 peer-reviewed studies show a range of benefits in mind, body, and even environmental health. In one unique study in 1975, 900 cities where one percent of the population was meditating experienced a reduction in the rate of crime.

Testimonials to TM’s powerful ability to heal can be found throughout the Alliance for PTSD Recovery website. The Research page provides details on several studies and an explanation of how TM relieves stress and fatigue in the brain. Included is a meta-analysis that demonstrates consistency in TM’s powerful effects.

Also see Girl Speaks for First Time in One Year, the remarkable story of a 10-year-old girl’s recovery after learning TM.

ArmeniaRecoveryNow’s greatest need is funding. Current conditions in Armenia intensify the need to scale up our efforts. As non-governmental organizations deliver housing, food, and other necessities, ArmeniaRecoveryNowis there to help relieve the inner trauma Armenians face.

In the first year of ArmeniaRecoveryNow, the number of people who were taught TM in Armenia increased by 890% from the average of the prior four years. But this is only the beginning.

Please donate today so that more people in Armenia can have access to Transcendental Meditation. Your tax-deductible donation will cover teaching expenses and allow those in need to learn on a full scholarship.

Help bring relief to more victims of PTSD and create a brighter future for Armenia. Contributions in any amount are appreciated. Individuals interested in contributing may donate online or with a check to Alliance for PTSD Recovery, at 1000 Purusha Place, Suite 314, Romney, West Virginia 26757.

To learn more about ArmeniaRecoveryNow, visit the website. Alliance for PTSD Recovery is a 501(c)(3) non-profit charitable and research organization dedicated to the study and treatment of Post-Traumatic Stress Disorder (PTSD).

Moscow Says Baku and Yerevan Are Ready to ‘Meet Half Way’