A Tremendous Milestone on the Road to Justice 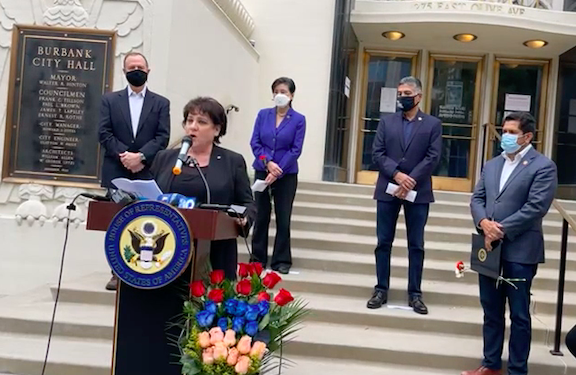 Moments after President Joe Biden recognized the Armenian Genocide on Saturday, Rep. Adam Schiff kicked off an already planned press conference on the steps of Burbank City Hall, to commemorate the Armenian Genocide, but also to gather some of his Congressional colleagues who have supported efforts for U.S. recognition of the crime.

Joining Schiff at the press conference were Representatives Judy Chu (D-Pasadena), Tony Cardenas (D-Los Angeles) and Jimmy Gomez (D-Los Angeles), each of whom has played a role in advancing justice for the Armenian Genocide in Congress. They each spoke of the significance of Biden’s recognition as it applied to the current realities in Armenia and Artsakh.

Schiff had invited Nora Hovsepian, the Chair of the Armenian National Committee of America-Western Region to address the gathering on behalf of the thousands of Armenian-American activists and community members whose relentless efforts came to fruition with the presidential recognition of the Genocide.

In a moving speech, Hovsepian not only acknowledged the important milestone, but also thanked those who have carried the torch of justice in Congress, especially Adam Schiff, who for more than two decades has been a staunch advocate of Armenian Genocide recognition in Congress and by the president.

Below is the entire text of Hovsepian’s speech at Saturday’s press conference.

Thank you Congressman Schiff for giving me the opportunity on this historic day to represent the voice of the Armenian-American community.

After 106 years of persistent struggle, the Armenian-American community has finally reached a tremendous milestone on the road to justice. Today as we honor the victims of the Armenian Genocide, we also give thanks to all those who helped us reach this point – from our allies and supporters in Congress such as our four amazing representatives here today, to the media which helps educate the public, to our hundreds of thousands of activists and coalition partners who continue to relentlessly pursue a just resolution and accountability for this unpunished Crime Against Humanity.

I think I can speak for virtually every Armenian when I say that it feels like a huge weight has finally been lifted from our shoulders – a heavy burden we have borne all our lives passed down through generations by our grandparents who came to these shores as orphans after losing their entire families while the perpetrator walked away with impunity. For too long, we were silenced by government officials who for political expediency ignored their own history. For too long, we have had to deal with grief, despair, anger, and trauma.

But there have been glimmers of hope along the way. In 1981, President Ronald Reagan uttered the words “Armenian Genocide” during a Holocaust Remembrance Day event. Alas, it did not become official US policy.

Next came recognition by 49 of the 50 US states, many of them calling on the federal government to do the same. Still it did not happen.
In 2019, the near-unanimous congressional recognition of the Armenian Genocide in both the House and Senate finally altered the course of US policy at least for the legislative branch, for which we are so grateful.

Our most vocal proponents of truth and justice, led by Congressman Adam Schiff, kept the issue alive year after year, confronting Turkish apologists, and calling out each Administration, Republican and Democrat, for allowing Turkey to have a veto over American foreign policy, and for their weakness in letting the Turkish dictator Erdogan and his predecessors bully them into using euphemisms to describe what they always knew was genocide.

That is, until now.

President Joe Biden, who for decades in the Senate was a strong proponent of Armenian Genocide recognition, who as Vice President attended the centennial memorial service for its 1.5 million victims at the National Cathedral, and who pledged last year to support Armenian Genocide recognition like many candidates before him, actually took the bold step of doing the right thing by rejecting Turkey’s gag rule, disengaging the U.S. from Turkey’s ongoing denial campaign, and delivering to us this hard-fought long-awaited victory on the road to justice, as government-wide US recognition has now become complete and unequivocal.

Today the ANCA Western Region has sent an invitation to President Biden to come to Los Angeles to give our community the opportunity to express its profound gratitude to him for being the first and only modern US President to affirm America’s vast historical record on the Armenian Genocide. We hope he will accept our invitation in the near future.

The President’s announcement is even more poignant now, in the wake of the 44-day war unleashed jointly last fall by Turkey and its ally Azerbaijan against Armenia and Artsakh, and it puts the historical record of 1915 into present-day context. You see, Turkey’s genocidal intent toward Armenians has never ended. We hear it in Erdogan’s promise to “finish what [his] grandfathers started.” We hear it in Aliyev’s threats to take all Armenian lands by force. We witness it in their intentional destruction of ancient Armenian churches, cemeteries and monuments. They try even now to rid the area of Armenians and to erase any trace of thousands of years of Armenian heritage.

They commit war crimes, torture prisoners of war, capture civilians, destroy Armenian towns and villages, teach their children to hate, and build dehumanizing trophy parks all with impunity, emboldened by the silence of western leaders and fueled by their ultra-nationalist pan-Turkic aspirations. So it was in 1915, and so it is today.

So beyond the immense symbolic value of US recognition of the Armenian Genocide to set the historical record straight, this recognition finally ends the era of US complicity in Turkey’s denial, safeguards Armenians’ right to exist against ongoing threats of annihilation, promotes the right of Armenia and Artsakh to exist in peace without threat of invasion, sends a message to dictators around the world that their aggression will no longer be met with silence and trepidation, and finally opens the door to truth, accountability and most of all, justice.

On behalf of the ANCA Western Region, its local chapters, volunteers, activists, and the Armenian-American community it represents, I want to express our profound gratitude to Members of Congress Adam Schiff, Judy Chu, Tony Cardenas, Jimmy Gomez and their hundreds of colleagues for the courage you have all shown our community. We are honored to have you represent us, and we are grateful to you all.