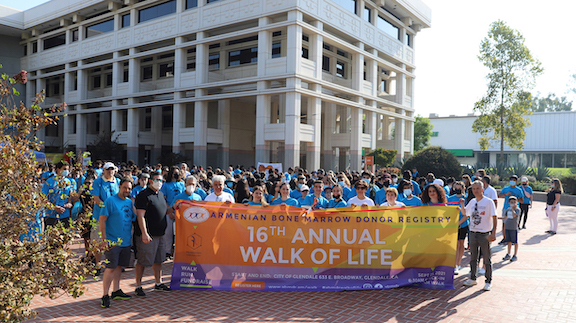 A scene from the ribbon-cutting ceremony. Photo by Aleko Boghoskhanian, courtesy of the ABMDR

LOS ANGELES— The Armenian Bone Marrow Donor Registry held simultaneous walkathons on the East and West Coasts of the United States, to honor the memory of soldiers fallen in last year’s Artsakh War and in solidarity with ABMDR patients in need of a stem cell donor match. The walkathons were held on Saturday, September 25.

The walkathons, which took place in Watertown and Los Angeles, drew unprecedented community support and youth involvement, with numerous schools and grassroots organizations participating in the events.

The jubilant opening ceremony of the walk in Watertown, the tenth annual Walk of Life, took place at the St. James Charles Mosesian Cultural and Youth Center. Subsequently the participants began a two-mile walk, led by Jack Antounian and other representatives of the Armenian Business Network. The walk concluded at Saltonstall Park, where participants enjoyed music, dancing, and food, along with those attending the annual Faire on the Square festival.

In her opening remarks, Walkathon Committee Co-chair Dr. Christina Ashjian said, “We are glad to be back this year to an in-person event, on the same day that our team in Boston is also hosting the walkathon on the East Coast. Last year’s virtual walk was a bit different, but it still made an impact, getting walkers from all over the globe to participate over a month’s period, raising awareness to continue our life-saving mission. Thank you all for coming and being believers in this organization.”

Dr. Ashjian said youth participation in this year’s walkathon was extraordinary. “A special thank you to Providence High School for showing up today with the biggest group we’ve seen in our 16 years of hosting this walkathon,” said Dr. Ashjian. “This was thanks to Janet Fontane, Dr. Arjan Harjani, and Sona Ashjian. Academy of Science Medicine students from Crescenta Valley High School are also here with big numbers, thanks to Eric Markarian.”

Next to address the attendees was ABMDR President Dr. Frieda Jordan. “I’d like to thank our tireless Walkathon Committee for organizing this beautiful event,” she said. “Last year, Armenia had to fight not only the COVID-19 pandemic, but also the Artsakh War, which claimed the lives of thousands of innocent civilians and soldiers. Among those fallen soldiers were many ABMDR donors who had joined ABMDR in times of peace to be able to save a patient’s life. Today, we salute these heroes and walk in their honor. As we do so, we pledge to continue to get stronger, recruit more donors, save more precious lives, and help rebuild our nation. There is no doubt that we can accomplish all of these goals if we stand united.”

Subsequently remarks were delivered by State Senator Anthony Portantino, a longtime supporter of ABMDR. “I’m proud to join you this morning at this very important event, and proud to represent this wonderful community,” said Portantino. “We all know someone who’s been struck by cancer, or someone who has had another health issue. Many of us probably know someone who has been affected by the war in Artsakh as well. So it’s very appropriate that we commemorate and honor those who were impacted by the war. I’m actually going to go to Artsakh in November. It will be my fourth trip there. But today, we’re here to celebrate the life-saving mission of ABMDR.” With this, Senator Portantino presented a Certificate of Recognition to Dr. Jordan, in appreciation of ABMDR’s dedication to serving families affected by cancer. “This event brings people together around a unified cause,” the Certificate signed by Portantino read; “congratulations on behalf of the California State Senate.”

Next, Christopher Khachadour presented the ABMDR Board members with a Certificate of Recognition, on behalf of Assemblymember Laura Friedman and the California State Assembly, honoring the life-saving mission of ABMDR.

Once again, a beloved feature of this year’s walkathon was a large banner, displayed in the plaza of the Glendale City building, on which walk supporters wrote down their individual reasons for participating in the event, whether in honor of loved ones or in support of all those who need a life-saving stem cell donor match.

Before the conclusion of the ceremony, Dr. Ashjian introduced Minella Harabidian, a walk participant, to share her story of how she became a supporter of the Registry’s work. “Some years ago, we began recruiting everyone around us to help us find a match for Biurad, my nine-year-old cousin who was diagnosed with leukemia,” said Harabidian.”After waiting what felt like an eternity, we finally found a match for him. However, in 2007, we lost our little Biurad before he could have his transplant surgery. This is why your presence here today is so important: not only because you can help save someone’s life, but you can provide a sliver of hope for someone who’s going through a really dark time.”

Following Walk of Life’s ribbon-cutting ceremony, the 5-K walk-run looped through central Glendale. The walkathon concluded at the plaza of the Glendale City building, where the festivities continued into the day. The event also gave participants the opportunity to join the ranks of ABMDR as potential bone marrow stem cell donors, as many volunteers were on hand to answer questions and welcome new recruits.

This year, the team with the most participants in the walkathon was the one from Providence High School, while the team that raised the most funds was Team Angel, in memory of Biurad Moghadesian.

Established in 1999, ABMDR, a nonprofit organization, helps Armenians and non-Armenians worldwide survive life-threatening, blood-related illnesses by recruiting and matching donors to those requiring bone marrow stem cell transplants. To date, the registry has recruited over 32,000 donors in 44 countries across four continents, identified over 9,000 patients, and facilitated 36 bone marrow transplants. For more information, call (323) 663 – 3609 or visit the website.