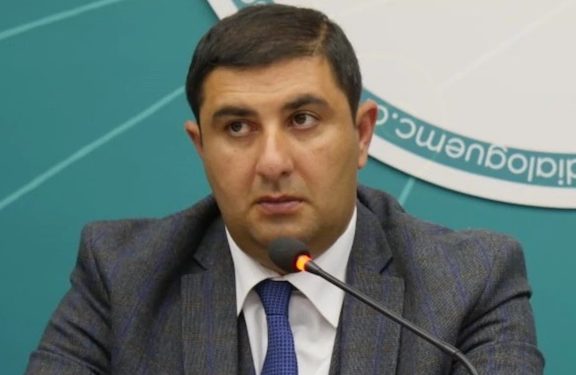 YEREVAN (Azatutyun.am)—A leader of the political force that won the October 17 municipal election in Gyumri became the mayor of Armenia’s second largest city on Monday after striking a power-sharing deal with Prime Minister Nikol Pashinyan’s party.

Gyumri has been run by Samvel Balasanyan, a local businessman, for the last nine years. Although Balasanyan decided not to seek another term in office, a newly created bloc bearing his name joined the mayoral race.
The Balasanian Bloc garnered 36.6 percent of the vote, earning it 14 seats in the 33-member city council empowered to elect the mayor. In a serious setback for Pashinian, the ruling Civil Contract party finished second with 11 seats. The remaining eight seats were distributed among three opposition parties.

He was backed by council members representing his bloc and Pashinyan’s party in line with a “memorandum of cooperation” signed by the two political forces on Saturday.

A senior Civil Contract member who signed the deal said they agreed to share “responsibility for governing the city” and pursue a “coordinated staffing policy.” The deal entitles Civil Contract to naming Gyumri’s deputy mayors, she said.

It was signed two days after two senior municipal officials affiliated with the Balasanyan Bloc were arrested by Armenia’s National Security Service on corruption charges. The bloc did not publicly allege political reasons behind the arrests.

Some Armenian outlets reported earlier in October that the Balasanyan Bloc is facing strong pressure from the central government to reach a power-sharing deal with Pashinyan’s party and even cede the post of mayor to it. Senior party figures denied such pressure.

Civil Contract’s list of candidates in the Gyumri election was topped by Hovannes Harutiunyan, the governor of surrounding Shirak province. Harutiunyan is now widely expected to be sacked and replaced by a pro-government member of the Armenian parliament, Nazeli Baghdasaryan. The latter will be the fourth provincial governor handpicked by Pashinyan in the last three and a half years.

The Balasanyan Bloc would have still managed to install Samsonian as mayor had it accepted a coalition proposal from the opposition Zartonk (Awakening) party that controls four seats in the new Gyumri council. A representative of the bloc, Sona Arakelyan, said it chose to team up with the ruling party instead because “the people of Gyumri gave the largest number of votes to these two forces.”

Less than one-quarter of the city’s eligible voters went to the polls on October 17.

Samsonian also defended his bloc’s political choice criticized by opposition groups. “By gaining an absolute majority [in the council] we will manage to jointly address Gyumri’s problems even more rapidly,” the newly elected mayor told reporters. “If we were not united, there would be a problem.”