After Yerevan Criticizes CSTO, Its Head Says Border Standoff is a ‘Threat’ to Member-State Armenia 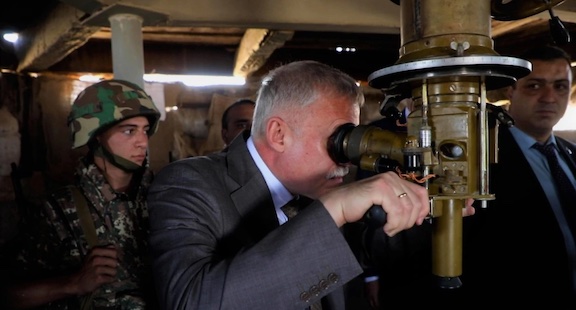 Zas, who is visiting Armenia, told reporters that he believed opportunities for resolving the Armenian-Azerbaijani border conflict through political means have not been exhausted and it is necessary to continue working toward this goal. The CSTO head said that the group is consistently focused on the border standoff.

On Monday, Armenia’s Defense Minister Arshak Karapetyan also chided Zas personally at the start of their talks in Yerevan, saying “we were waiting for your visit in May. It was a fairly tense period for Armenia, but unfortunately your visit didn’t take place,” according to the defense ministry press service.

After Azerbaijani forces crossed into Armenia’s territory on May 12, Yerevan appealed to the CSTO to invoke Article 2 of its founding treaty which requires the CSTO to discuss a collective response to grave security threats facing its member states.

Last month, Zas said the standoff was not “serious enough” to warrant the a response from the CSTO, angering Armenia’s leadership.

During a visit to a military base in Armenia’s Ararat Province on Tuesday, Zas was asked to comment on the proposals the CSTO has developed regarding the resolution of the border situation and the organization’s failure to give a clear and simple assessment of the incidents on the Armenian-Azerbaijani border, Armenpress reported.

“We are carrying out organized monitoring, including with the help of Armenian state structures,” Zas told reporters. “Of course, we think that the incidents taking place at the border of Armenia and Azerbaijan, which we are talking about, pose a threat to the security of the Caucasus region of the CSTO’s responsibility and of course the security of Armenia, a member of the organization.”

“We are seriously concerned by the intensification of incidents on the border,” said Zas who said that such incidents impede the start of negotiations and complicated “the implementation of the key agreements reached between the leaders of Armenia, Azerbaijan and Russia on ways to end the Nagorno Karabakh conflict and establish peace in the region.”