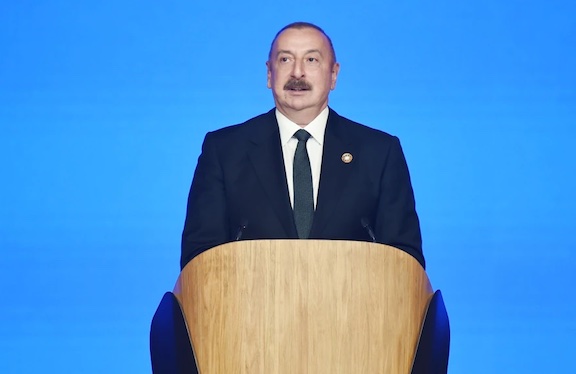 YEREVAN (Azatutyun.am)—Azerbaijani President Ilham Aliyev has accused France of planning what he described as a “dirty provocation” against Baku at the recent Francophonie summit by drafting a final resolution promoting Armenia’s interest, something that he claimed was thwarted by Azerbaijan’s friends.

Earlier, Armenia’s Foreign Minister Ararat Mirzoyan emphasized the importance of the fact that in the draft resolution on crisis situations in the Francophone space that was submitted to the summit in Djerba, Tunisia, on November 19-20 La Francophonie member states and governments “have expressed their solidarity with Armenia, making as their own the main issues that determine the peaceful settlement” between the parties to the Armenian-Azerbaijani conflict.

Over the weekend Azerbaijan’s Ministry of Foreign Affairs issued a statement, accusing France of using the International Organization of La Francophonie (OIF) as “an instrument of its foreign policy” and warning that it will consider the documents adopted by it as “politically biased.”

Speaking at an event dedicated to the 30th anniversary of the ruling Yeni Azerbaijan party, Aliyev, who is also the leader of the party, charged that France, which patronizes Armenia, was behind the “dirty provocation.”

He claimed that the Francophonie summit sought to adopt a resolution in which there were “untrue” statements against Azerbaijan.

“But all anti-Azerbaijani theses have been removed thanks to the efforts of our friends, whom we know very well,” the Azerbaijani leader said, without naming any countries that he claimed supported Baku.

“The French-Armenian tandem failed to use that opportunity,” Aliyev added.
Officials in France and Armenia did not immediately comment on the Azerbaijani president’s statements.

Armenia has been a full member of the OIF since 2012. Azerbaijan is not a member of the 54-nation organization of mostly French-speaking countries.

In his lengthy speech at the party event Aliyev also boasted that despite the fact that Azerbaijan is not a member of the Collective Security Treaty Organization, a Russia-led six-nation defense alliance also including Armenia, Belarus, Kazakhstan, Kyrgyzstan and Tajikistan, it has more friends in it than Armenia.

He said that Armenia “has failed to turn the CSTO members against Azerbaijan.”

Yerevan says Azerbaijan has captured dozens of square kilometers of Armenian territory in a series of incursions since May 2021. Azerbaijan denies the accusation.

Lukashenko opposed any CSTO intervention in the Armenian-Azerbaijani conflict. He said that Azerbaijan is not an adversary of Belarus and other CSTO member states and its President Aliyev is “totally our guy.” Pashinyan should therefore negotiate with Aliyev over Armenian-Azerbaijani border disputes, he said.

The remarks sparked criticism of the CSTO and Lukashenko in Armenia, triggering a war of words between Yerevan and Minsk ahead of the organization’s summit due in the Armenian capital on November 23.