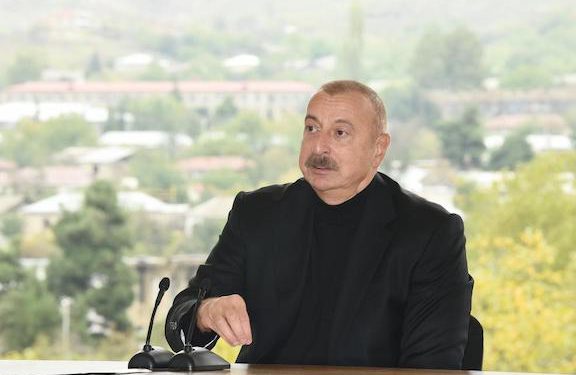 President Ilham Aliyev of Azerbaijan speaks at the opening of a military unit in occupied Hadrut on Dec. 24

President Ilham Aliyev of Azerbaijan during a meeting with an Iranian official hailed the “new wonderful opportunities” that have emerged after the 2020 Karabakh war, among them the so-called “Zangezur Corridor”—the scheme to link Azerbaijan with Nakhichevan via a road running through Armenia.

Aliyev also touted “positive signals” from Armenia on the construction of roads and railways, as well as another scheme, this time the so-called “3+3” proposal by Ankara that envisions a regional bloc that includes Turkey, Azerbaijan, Armenia, Georgia, Russia and Iran.

The Azerbaijani leader made the remarks during a meeting with Rostam Ghasemi, Iran’s Urban Development Minister, who is also co-chair of Azerbaijan-Iran Joint Intergovernmental Commission on Economic Cooperation, according to the AzerTac news agency.

“After the war, Iranian-Azerbaijani relations have expanded even more. A very promising 3+3 cooperation platform has been created to develop regional cooperation… At the same time, I am sure that in the near future Iranian companies will start working actively in the liberated territories… Yesterday you got acquainted also with the work being carried out in the direction of creating the ‘Zangazur [Zangezur] Corridor,’” Aliyev told Ghasemi.

“Roads and railways are being built successfully. We are receive positive news. Armenia, in its turn, plans to start the [respective] work. In other words, I hope that the post-war period will open new opportunities for the whole region,” Aliyev added.

Iran and Azerbaijan signed an agreement on the construction of AstaraChai border bridge on the common border to develop bilateral transit, Mehr reported.

Ghasemi reached an agreement on the construction of a large bridge over the AstaraChai River on the common border of the two countries during his visit to Azerbaijan.

Hassan Kalhori, director-general of the company for construction and development of transport infrastructures in the north of Iran, said that the AstaraChai border bridge will be built in accordance with the previously signed agreement between Iran and Azerbaijan.

Vehicles will be able to cross the bridge, which will be built over the Astrachai River on the common border of the two countries.

“The construction of this bridge was agreed upon by both sides a couple of years ago,” the Iranian official said, adding that the bridge “will contribute to the development of the transport and tourism industry of the two countries.”

“Expanding and facilitating transit between Iran and Azerbaijan is another goal of the bridge, which will be built in parallel with the joint railway bridge between the two countries,” Kalhori added.