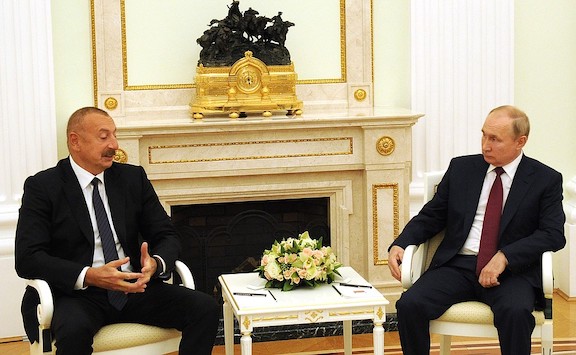 The presidents of Russia and Azerbaijan, Valdimir Putin (right) and Ilham Aliyev meet at the Kremlin on July 20

YEREVAN (Azatutyun.am)—Azerbaijani President Ilham Aliyev has again claimed that Azerbaijan resolved the conflict over Nagorno-Karabakh during last year’s war and will not hold talks with Armenia on the territory’s status.

Aliyev said on Thursday Yerevan should recognize instead Azerbaijani sovereignty over Karabakh through a “peace treaty” proposed by Baku.

“The Azerbaijani people are rightly unhappy to see statements … made in France and America to the effect that the conflict must be resolved,” he told Azerbaijani state television. “I am again telling them that I, the president of Azerbaijan, have already resolved that issue, period. There is no Nagorno-Karabakh, no status.”

Speaking one day after meeting with Russian President Vladimir Putin in Moscow, Aliyev claimed that Moscow agrees with his stance. “Russia and Azerbaijan believe that the war is over and revanchist tendencies in Armenia must not be allowed,” he said.

In a joint statement released in April, the U.S., Russian and French mediators co-heading the OSCE Minsk Group called on Armenia and Azerbaijan to resume negotiations on a “comprehensive and sustainable” resolution of the Karabakh conflict based on their pre-war peace proposals. They expressed readiness to facilitate such talks, including with renewed visits to the conflict zone.

Prime Minister Nikol Pashinyan cited this statement last week when he disputed Aliyev’s claim that Azerbaijan’s victory in the six-week war put an end to the long-standing dispute. Pashinyan made clear that Yerevan will continue to pursue “the realization of the Karabakh people’s right to self-determination.”

“The reality is that the status of Nagorno-Karabakh should be determined through negotiations within the framework of the OSCE Minsk Group,” Lacote told RFE/RL’s Armenian Service in an interview.

He said the French ambassador to Azerbaijan did not join other Baku-based diplomats in visiting the Azerbaijani-controlled Karabakh town of Shushi (Shusha) earlier this month because Karabakh’s status remains unresolved.

The U.S. and Russian ambassadors in Baku also steered clear of the trip organized by the Azerbaijani Foreign Ministry.

As recently as on June 9, Russian Foreign Minister Sergei Lavrov stated that that “the question of Nagorno-Karabakh’s status remains unresolved” and “it must eventually be settled with the participation of the OSCE Minsk Group co-chairs.”

Still, Lavrov said the mediators should not rush to try to broker an Armenian-Azerbaijani agreement on the status at this stage. They should focus instead on confidence-building measures in the Karabakh conflict zone, he told reporters in Moscow.

The Russian-brokered agreement that stopped the Armenian-Azerbaijani war last November calls for a number of such measures, notably the restoration of transport links between Armenia and Azerbaijan.

Lacote acknowledged Russia’s role in halting the war and maintaining the ceasefire in and around Karabakh.

“The current reality is that Russia is ensuring the security of the Karabakh Armenians,” he said. “If it hadn’t been for Russian [peacekeeping] forces, there would have been no Armenians in Karabakh now.”

The French diplomat said at the same that the truce accord brokered by Putin “did not solve all issues,” including Karabakh’s status, and needs to be complemented by an Armenian-Azerbaijani “political process” mediated by the Minsk Group co-chairs.

Over 3,500 Diasporans in Europe Take Part in Armenian Diaspora Survey