Aliyev Warns Armenia ‘Not to Make Another Mistake’ 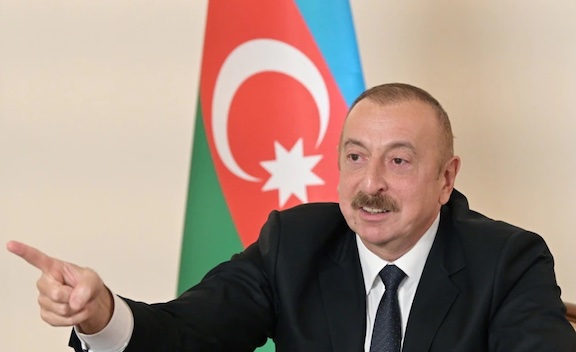 YEREVAN (Azatutyun.am)—President Ilham Aliyev of Azerbaijan has warned Armenia to get down to negotiations on a peace treaty “not to make another mistake” amid what appears to be a new escalation at the border between the two South Caucasus nations that warred last fall.

Armenia and Azerbaijan waged a 44-day war over Nagorno-Karabakh which claimed over 6,000 lives and ended in November 2020 with a Moscow-brokered cease-fire that saw Armenia ceding swaths of territory that ethnic Armenians had controlled for decades.

In the following months the Azerbaijani leader has sought a more comprehensive deal with Armenia that Baku hopes will put an end to what it views as Armenian territorial claims to Azerbaijan.

“We are ready to start such work. But there is no official reaction from Armenia. Through unofficial channels we have been receiving information that Armenia is not ready for it. I think it will be a big mistake for them,” Aliyev said on Wednesday, as quoted by Azerbaijani media.
The Azerbaijani leader’s remarks came amid a fresh incident at the Armenian-Azerbaijani border in which Armenia said one of its servicemen was killed in a skirmish near Azerbaijan’s western exclave of Nakhichevan. Baku said one of its soldiers was wounded in a shootout with Armenian forces.

The two sides have blamed each other for the escalation at the border that has already been tense since May when Armenia accused Azerbaijan of advancing its troops several kilometers deep into its sovereign territory at several sections, a claim denied by Baku.

In his remarks during today’s meeting with families of Azerbaijani soldiers killed and maimed during the armed conflict, Aliyev again insisted that the Nagorno-Karabakh conflict has been resolved and that there is no issue of the disputed region’s status anymore.

“The two sides must recognize each other’s territorial integrity, recognize the borders and get down to the work on border delimitation,” said Aliyev, stressing that international organizations hail the idea of delimitation and demarcation of the Soviet-era administrative border between Armenia and Azerbaijan.

Stressing that Azerbaijan speaks from the position of the victor in last year’s war, Aliyev warned: “If Armenia does not want this, it’s up to it. But Armenia should think carefully, because otherwise it will be too late.”

In a phone call with United States Secretary of State Antony Blinken late on Tuesday Armenian Prime Minister Nikol Pashinyan, in particular, stressed that “the [Nagorno-Karabakh] conflict is not resolved” and that “it calls for a comprehensive settlement, which can only be achieved in the Minsk Group co-chairing format.”

The terms of the November 10, 2020 ceasefire deal signed by Armenia, Azerbaijan and Russia also envisage the opening of regional roads and other transport links. In particular, under the document that brought Russian peacekeepers to Nagorno-Karabakh and provided for the Armenian-populated region’s link with Armenia, Yerevan is to allow Baku to have a transport link with its exclave of Nakhichevan.

Baku insists that this link should have the status of a corridor. But Armenian Prime Minister Pashinian has repeatedly denied that the future transport link between Azerbaijan and its western exclave will have such a status.

In his remarks Wednesday Aliyev again referred to Armenia’s Syunik province, which is called Zangezur in Azerbaijan, as to historical Azerbaijani territory.

“We will return there and we are returning there. Nobody can stop us. We will definitely return there because there is no other way. After the opening of all transport links we will, of course, return there, and the Azerbaijani population will return to the lands of their ancestors. A tripartite statement of November 10 says that all refugees must return to their homeland. Our native land is Zangezur, our native land is Goycha (Sevan) and Irevan (Yerevan),” the Azerbaijani president said.

This is not the first time Aliyev raises the issue of “historical Azerbaijani territories” in Armenia.

Official Yerevan has condemned such rhetoric before, saying that it amounts to territorial claims.