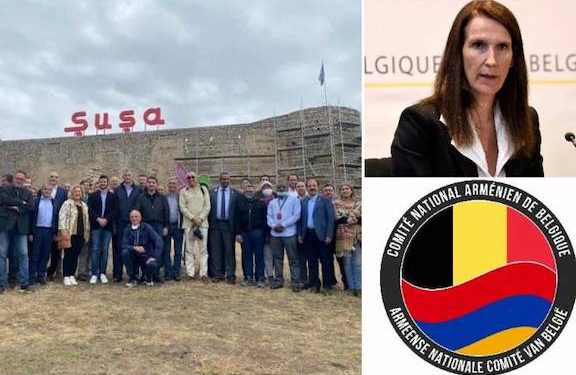 The Armenian National Committee of Belgium has sent a letter to Belgian Deputy Prime Minister and Foreign Minister Sophie Wilmès, expressing its serious concern over the recent visit of ambassadors accredited in Azerbaijan, including the Belgian Ambassador, to the occupied territories of Artsakh, in particular Shushi, which was organized by Azerbaijan’s President Ilham Aliyev.

In the letter the ANC of Belgium said that the Armenian community there strongly condemns the visit.

“By accepting that invitation, the Belgian diplomat, in fact, has taken part in the propaganda campaign by Azerbaijan’s dictatorial regime, which seeks to justify ethnic cleansing and war crimes, as a result of which the ethnic Armenian population of Shushi and other settlements of Artsakh suffered greatly months ago,” said the Belgium ANC.

“This seriously threatens the continued efforts of the OSCE Minsk Group, which are aimed at finding a lasting, peaceful and fair settlement to the Nagorno Karabakh conflict. Belgium’s participation further surprised us, taking into consideration the fact that Belgium and you personally have expressed your unconditional support to the efforts of the OSCE Minsk Group Co-Chairmanship,” the ANC of Belgium told the foreign minister.

“It would have been much better if you followed the example of the [Minsk Group] Co-Chairing countries—US, Russia and France—which refused to participate in that trip. Their rejection of that invitation was a clear message that the conflict is not solved yet,” the letter added.

“Belgium’s participation in that visit goes counter to your calls, as a foreign minister, urging the immediate release the Armenian prisoners of war who are subject to ill treatment in Baku jails,” explained the ANC of Belgium.

As full citizens of Belgium, who continue respecting that country’s and Europe’s values, the Armenian National Committee members urged the government, and the minister in particular, to condemn the Azerbaijani actions.