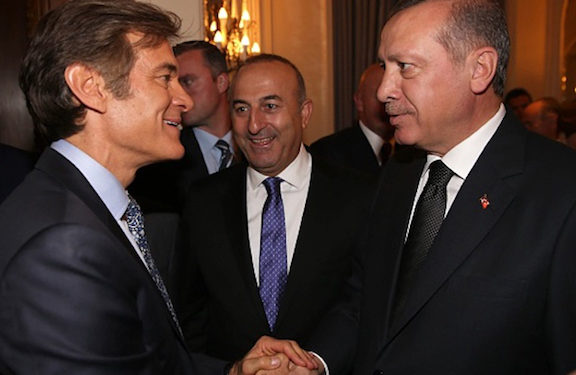 WASHINGTON—The Armenian National Committee of America has called for a U.S. Department of Justice investigation into Pennsylvania Senate candidate Dr. Mehmet Oz, amid growing alarm over Oz’s links to Turkey’s dictator Recep Erdogan, his dual Turkey – U.S. citizenship, and open association with Armenian Genocide deniers.  With the hotly contested May 17 Republican primary just days away, the ANC of Pennsylvania is expanding its grassroots campaign to ensure voters are making informed choices at the ballot box.

A “foreign principal” can be a foreign government, a foreign political party, any person outside the United States (except U.S. citizens who are domiciled within the United States), and any entity organized under the laws of a foreign country or having its principal place of business in a foreign country. “Turkish Airlines is 49.13 percent owned by the Turkish Government. FARA filings show that Turkish Airlines has been a foreign principal since at least 1975 and as recently as 2015,” asserted Hamparian.

Former U.S. Justice Department FARA unit official David Laufman told The New York Post that an investigation into the matter is warranted. “I think it would be appropriate for [the Justice Department] to undertake logical, analytical, and investigative steps to determine whether Dr. Oz acted as a public relations counsel or publicity agent in the United States on behalf of Turkish Airlines,” Laufman explained. “If he did, he likely would have an obligation to register unless he qualified for an exemption.”

Hamparian outlined the full range of broader national security and Armenian American community concerns in an op/ed in “The Washington Times.” “For Americans of Armenian heritage – having spent the better part of the past century working, successfully, to end U.S. cover-ups of Turkey’s genocidal crimes – it would represent a betrayal of the worst kind, a shameful rollback of America’s commitment to human rights, to send to the U.S. Senate an ally of Erdogan, the world’s foremost Armenian Genocide denier,” explained Hamparian.

He cited American Enterprise Institute’s Michael Rubin, who has argued that “Oz’s dual citizenship – and his reluctance to renounce Turkish citizenship – will keep the FBI and security managers up at night,” adding that it’s “fair game to question Oz’s judgment embracing the most reactionary elements in Turkish society.”

In an interview with Breitbart News, Hamparian argued “that Mehmet Oz’s ties to Turkey put him “at odds” with putting the interests of Pennsylvanians and Americans first.”

With the Pennsylvania Senate Republican primary just days away on May 17th, the latest polling shows Mehmet Oz is running neck and neck against Kathy Barnette and David McCormick in the tight seven-candidate race.  The ANC of Pennsylvania has ramped up its statewide grassroots campaign to ensure voters know the truth about Oz’s ties to the Turkish government and Erdogan-aligned stakeholders and are able to make informed choices at the ballot box.

“The ANC of Pennsylvania has expressed its concerns over Oz’s candidacy from the very beginning. Deeper ties to the Turkish government and its interests are uncovered every day. Pennsylvanians deserve a Senator who will represent our interests – not those of dictator Recep Erdogan,” explained ANC of Pennsylvania Co-Chair Nora Kzirian.

Last month, fellow ANC Pennsylvania Co-Chair Karine Shamlian told NBC News, “We have Armenians that are Republicans, Armenians that are Democrats, but when it comes down to things that affect the Armenian community and the Armenian diaspora, we rally regardless of the political party. We feel that this Senate seat is in jeopardy of being controlled by a foreign government, quite honestly.”

Armenian Education, Healthcare, and Entrepreneurship Powered by the Turpanjian Family