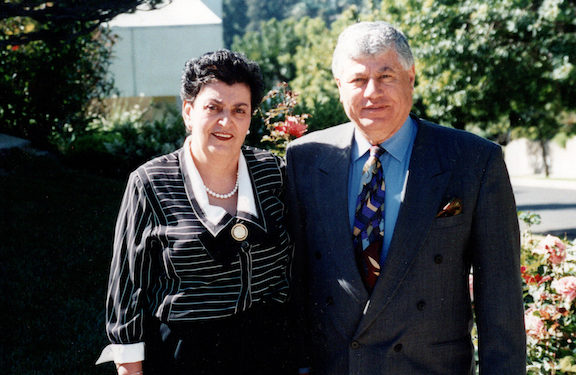 WASHINGTON—The Armenian National Committee of America (ANCA) Summer Academy, the newest addition to the organization’s suite of youth empowerment and career development programs, has been named in honor of Haroutioun and Elizabeth Kasparian in recognition for their lifetime of selfless service and sacrifice for the Armenian community and cause, and the generosity of their daughter and son-in-law, Arsho and Adour Aghjayan, and grandson, Nareg.

“Tried and true patriots, Haroutioun and Elizabeth Kasparian lived lives dedicated – in equal measure – to honoring our past and to building our future,” said ANCA Chairman Raffi Hamparian. “And so, it is altogether fitting that – in their honor and with the help of their loving family – we will educate and inspire new generations of Armenians to carry the torch of Armenian liberty.”

The Aghjayan family – longstanding supporters of the ANCA’s advocacy – were thrilled to learn of the organization’s decision to expand its youth empowerment and public policy careers initiatives to high school students, with the inaugural session of the Summer Academy set to take place in the nation’s capital from August 9th through August 13th.

“Having seen the success of the ANCA in engaging and empowering university students and graduates – including our own son Nareg – we warmly welcomed the ANCA’s announcement of a new program geared specifically for high school students,” said Arsho and Adour Aghjayan. Nareg, an alumnus of the ANCA Leo Sarkisian Program, concurred. “High school leadership programs played a pivotal role in my own career development by exposing me, from an early age to the inner workings of the U.S. government and the policy-making process.  I am so very pleased that our family is able to bring this type of opportunity to a new generation of young Armenian Americans – helping them explore U.S. policymaking through the lens of pro-Armenia/Artsakh advocacy and presenting them with the types of career opportunities available in policy, politics, and media,” explained Nareg.

The Aghjayans chose to honor Arsho’s parents, Haroutioun and Elizabeth Kasparian, who had inspired them through their lifetime of commitment to the Armenian Church, community, and cause.

The Kasparian family immigrated to the U.S., via Beirut, Lebanon, and settled in Los Angeles in 1969.  Haroutioun would operate a series of small businesses through 1981 when he retired to focus on investments.  From the moment of their arrival, Haroutioun and Elizabeth were active contributors to the strengthening of the Los Angeles Armenian community.  Haroutioun served as a deacon in Holy Martyrs Armenian Church and later became a founding member of St. Garabed Armenian Church in Hollywood.  He was an early advocate for the area’s Armenian schools, serving in the parent-teachers’ association of Holy Martyrs Ferrahian Armenian School and later a benefactor and Board Member of the Rose & Alex Pilibos Armenian School. He was a supporter of the Homenetmen Armenian Scouting and Athletic Association’s Hollywood chapter, where his son, Vram, was among the earliest scouts.  Elizabeth Kasparian played an active role in the Armenian Relief Society’s Hollywood “Mayr” Chapter in Los Angeles, CA for over 45 years.  The advancement of the Armenian Cause was of central importance in the family’s life and motivated their life-long support for the efforts of the Armenian Revolutionary Federation and the Armenian National Committee of America.

Elizabeth Kasparian honors Haroutioun’s legacy and continues to inspire her family, friends, and community with her resilience and devotion to the Armenian Homeland.

The ANCA Haroutioun and Elizabeth Kasparian Summer Academy
During this inaugural year of the Haroutioun & Elizabeth Kasparian Summer Academy, the one-week, intensive program will bring a select group of fifteen high school students, 17-19 years of age, with proven community leadership experience to Washington DC, to learn more about the Armenian Cause and how our policy priorities are advanced within the framework of America’s federal government.

The program will involve direct engagement with federal policymakers, ANCA experts, and a range of professionals who are involved in matters related to both the Republics of Armenia and Artsakh. The Academy will also benefit from presentations from both those who have worked on issues related to the Armenian Cause for decades and those who are currently working in Washington, DC on contemporary matters – such as securing much-needed U.S. aid to the Republic of Artsakh’s citizens. Throughout the program, ample opportunities will be provided to explore Washington, DC, and make lasting friendships.

Summer Academy participants will be staying at the ANCA Aramian House, a landmark property in downtown Washington, DC, which serves as the home and permanent headquarters of the ANCA’s signature youth programs including the Hovig Apo Saghdejian Capital Gateway Program, Leo Sarkisian Internship Program, Maral Melkonian Avetisyan Summer Fellowship, and the ANCA Rising Leaders Program. The purchase of the Aramian House was made possible through the generous support of the family of Sue, Martha, and Margo Aramian.

Armenia to Ban Plastic Bags in 2022