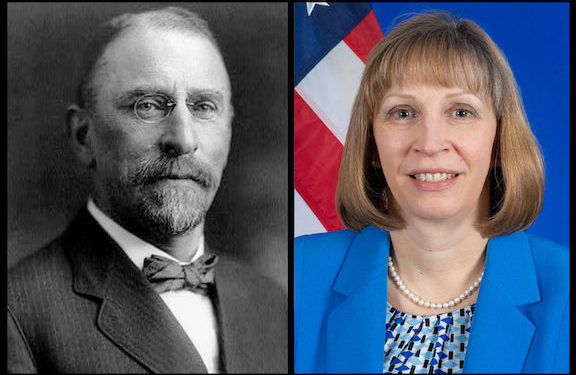 On the left: Amb. Henry Morgenthau Sr. (U.S. Ambassador to the Ottoman Empire from 1913-1916), a heroic figure who raised alarm bells – privately and publicly – about the Armenian Genocide and helped launch the Near East Foundation which raised over $2 billion (in current figures) to support victims of Ottoman atrocities. He later devoted much of his professional life to the rights of the Armenian nation. To the right: Current U.S. Ambassador to Armenia Lynne Tracy, who has received an “F” rating from the ANCA.

WASHINGTON—Armenian National Committee of America Chairman Raffi Hamparian has escalated calls for the recall of U.S. Ambassador to Armenia Lynne Tracy, underscoring to Congressional, community, and coalition partners the need for accountability for the system-wide failure of America’s top diplomat in Yerevan.

In December of last year, the ANCA gave Ambassador Lynne Tracy an “F” rating based upon her poor performance across fifteen different metrics. In the months since this grade was given, Ambassador Tracy has failed in new areas, among them the lack of meaningful U.S. aid to Artsakh refugees, meddling in Armenia’s electoral landscape, playing favorites among Armenian political forces, further complicating Armenia’s security and regional relationships, and failing to meaningfully address Azerbaijan’s illegal detention, abuse, and murder of Armenian prisoners of war.

“As I shared last year, the ANCA wants every American Ambassador to Armenia to be successful – for the United States, for Armenia, and for the century-long bond between these two nations,” said ANCA Chairman Raffi Hamparian. “The record shows, however, that Ambassador Tracy’s tenure at our U.S. Embassy in Yerevan has been marked by one profound failure after another, each worse than the last, adding up to a system-wide collapse of our diplomatic mission.”

Ambassador Tracy has failed to champion U.S. humanitarian aid for Artsakh families – even as other vulnerable global populations in Burma, Ethiopia, Yemen, and elsewhere have received hundreds of millions in emergency assistance. She has failed to fight for the release of Armenian prisoners of war, failed to speak out against the desecration of Armenian churches and holy sites, failed to confront Azerbaijan’s use of U.S. military aid – our American tax dollars – to kill and cripple Armenians, and failed to protect the U.S.-Armenia trade relationship against unfair attacks.

The ANCA reiterates its December, 2020 call on the Department of State to recall Ambassador Tracy, and urges the Biden Administration to reset the U.S.-Armenia relationship on solid footing by nominating a new Ambassador to the U.S. Embassy – Yerevan who will support Artsakh’s survival, Armenia’s sovereignty, the security of the Armenian homeland, and the strength of the U.S.-Armenia partnership.

The ANCA Report Card on Ambassador Tracy (below) has been revised from the original document issued late last year. In the category titled “Humanitarian aid for victims of Azerbaijani aggression,” Ambassador Tracy’s grade has been modified from a  “D” to an “F” as she has overseen a total and sustained failure of the U.S. Agency for International Development to properly respond to the humanitarian needs of tens of thousands of refugees who were forced from their indigenous homeland in Artsakh.

U.S. Calls on Azerbaijan to Pull Back Troops in Armenia