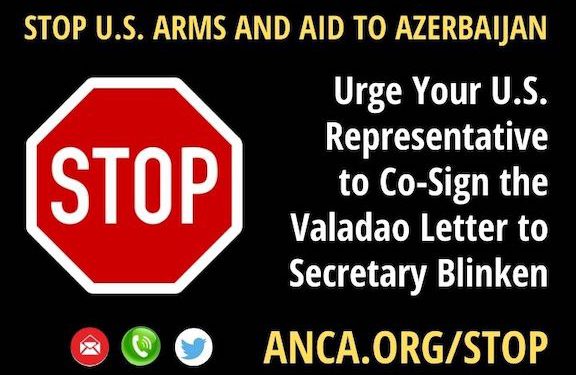 In a memo circulated to Congressional colleagues on Wednesday, Armenian Caucus leaders noted, “Azerbaijan’s attack on Armenians living Nagorno-Karabakh last fall, the continued detention of Armenian prisoners of war six months after the conflict, and other destabilizing actions in the region are inconsistent with the provisions of the Section 907 waiver and demonstrate the need for significant changes to the Administration’s waiver process to prevent further U.S. aid from going to Azerbaijan until they make demonstrable changes.”

Armenian Caucus leaders are urging the Congressional colleagues to cosign a letter to Secretary of State Antony Blinken asking for the “immediate termination of all U.S. military or security aid to Azerbaijan.”  The letter expresses concern about the Biden Administration’s waiver of Section 907 of the FREEDOM Support Act, which restricts U.S. aid to Azerbaijan based on their blockade of and aggression against Armenia and Artsakh.  “We are concerned that the State Department did not fully consider Azerbaijan’s lack of progress in ceasing its blockades and other offensive uses of force against Armenia and Nagorno-Karabakh (Artsakh), and instead moved forward with this waiver without detailing serious national security concerns,” states the letter.

The ANCA issued a nationwide call to action – anca.org/stop – encouraging all U.S. House members to support this bipartisan initiative.

Congressional Armenian Caucus Co-Chair Frank Pallone (D-NJ) slammed Azerbaijan’s advance into Armenia, tweeting, “Azerbaijan has now invaded Armenia in clear violation of international law. The U.S. must condemn this attack in unequivocal terms and use its influence with allies to bring about the withdrawal of Azeri forces from Armenian territory.”

Congressional Armenian Caucus Vice-Chair Adam Schiff (D-CA), stated in a Facebook post, “I am deeply concerned by recent reports that Azerbaijani troops have reportedly crossed into Armenian territory. If true, this is yet another dangerous and provocative action that could lead to further loss of life. It is past time for the United States to recognize that our policies have emboldened Azeri President Ilham Aliyev to escalate militarily, risking another war.”  Rep. Schiff went on to note, “I have been in communication with the Biden administration and urged them to engage more deeply through the Minsk Group, now more important than ever. According to reports, Azerbaijan is taking these actions just days after the State Department issued an unjustified waiver of restrictions under Section 907 against direct aid to Azerbaijan. We should not be providing military funding to a nation that habitually engages in human rights violations and violates the sovereignty of its neighbors.”

The full text of the Valadao / Armenian Caucus Congressional sign-on letter is provided below.

We wish to register our concern with your decision on April 26 to waive the longstanding statutory restriction on U.S. aid to Azerbaijan under Section 907 of the Freedom Support Act. This action is particularly distressing following Baku’s hostilities last fall against the Armenians living in Nagorno-Karabakh (Artsakh) and the delayed release of the remaining Armenian prisoners of war and detainees. While we appreciate the willingness of State Department officials including Deputy Assistant Secretary George Kent and Ambassador Andrew Schofer to discuss these issues, we believe the issuance of this waiver is a mistake and is not in line with Congressional intent. We will consider legislative action in response to clarify the waiver authority.

We are concerned that the State Department did not fully consider Azerbaijan’s lack of progress in ceasing its blockades and other offensive uses of force against Armenia and Nagorno-Karabakh (Artsakh), and instead moved forward with this waiver without detailing serious national security concerns. This year’s waiver comes despite last year’s 44-day war, Azerbaijan’s embrace of Al Qaeda-linked Syrian mercenaries, and Azerbaijani President Ilham Aliyev’s renunciation of further diplomacy to resolve outstanding issues. These actions are inconsistent with provisions of the Section 907 waiver and demonstrate the dire need for changes to the Administration’s waiver process to prevent further aid from going to Azerbaijan until they make demonstrable changes to their behavior.

In light of the Section 907 waiver, we urgently request that you suspend any existing military or security assistance to Azerbaijan, including aid provided under Section 333 Building Partner Capacity programs, and block any new U.S. aid that directly or indirectly contributes to Azerbaijan’s military operations, activities, or capabilities. The more than $100 million in such aid from U.S. taxpayers provided to Azerbaijan in recent years materially developed Baku’s military and border monitoring capabilities, allowing the Aliyev government to shift resources toward offensive operations against Nagorno-Karabakh (Artsakh) and Armenia. While it was positive to hear on a recent call that the Administration does not foresee providing additional Section 333 assistance beyond what has already been provided, the amount provided to date is itself disturbing.

The oil-rich Aliyev government, which continues to illegally hold Armenian prisoners of war and captured civilians six months after the end of hostilities, neither needs nor deserves U.S. assistance. American taxpayers should not be asked to subsidize Azerbaijan so long as they continue to take destabilizing action in the region, attack Armenians living in their indigenous homeland, and hamper ongoing efforts to negotiate a peaceful settlement to the conflict. As such, we ask for the immediate termination of all U.S. military or security aid to Azerbaijan.

Thank you for your immediate attention to these concerns.