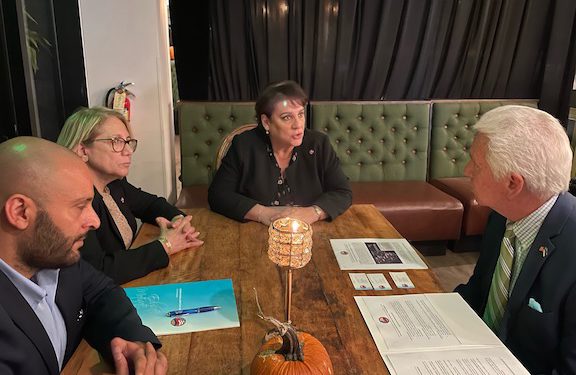 ANCA-WR Board and Executive Director meet with Rep. Jim Costa on Oct. 19 in Beverly Hills

“We need to make sure that Secretary Blinken understands that we must support Armenia the same way we have been supporting Ukraine,” said Representative Jim Costa.

The meeting took place following a reception in support of Congressman Jim Costa’s campaign ahead of the 2022 Mid-term Elections. The reception was hosted by long-time ANCA-Western Region supporter Sevak Khatchadourian who delivered a poignant speech during the event:

“There is so much turmoil going on in the world right now, the war in Ukraine, the protests in Iran, as well as other news such as the U.S. and Canada sending armored vehicles and supplies to Haiti to help fight gangs, or the touching story of a patient playing the saxophone during brain surgery in Italy. We also saw protesters throwing Heinz tomato soup at Vincent van Gogh’s “Sunflowers” painting at London’s National Gallery,” said Sevak Khatchadourian. “What we never hear is when Azerbaijan launches massive attacks on Armenia or Artsakh killing civilians, or when Azerbaijani forces execute Armenian soldiers, or when Armenian women soldiers are raped, tortured, and killed, bodies mutilated by Azerbaijani soldiers, actions which are in violation of international law.”

“We are grateful to Congressman Jim Costa for consistently standing firmly in support of all aspects of the Armenian Cause throughout his political career first in Sacramento and then in Washington. He has been a true and loyal friend to our community and we look forward to continuing our working relationship with him. Thank you also to long time ANCA-WR supporter and community activist Sevak Khatchadourian for hosting such a wonderful event for Congressman Costa.”