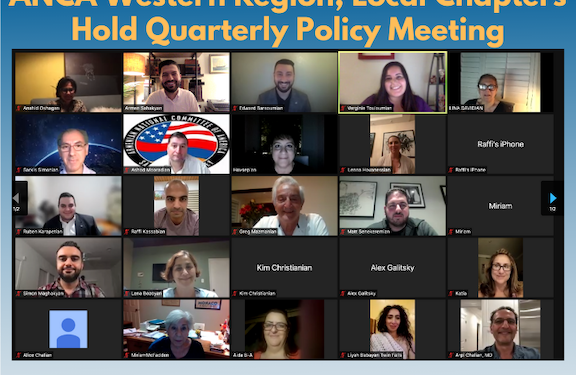 A scene from the ANCA-WR, local chapters' meeting

The Armenian National Committee of America—Western Region Board of Directors, staff members, and local chapter leaders from throughout the Western U.S. came together to discuss and coordinate ongoing priorities of the organization on the local, state, and federal levels.

With the annual Congressional August Recess currently underway, meeting participants discussed the progress made thus far in advocating for Armenian-American federal priorities in dozens of meetings with Members of Congress as well as other projects of the organization. Representatives from nearly all of the Southern California ANCA chapters, as well as those from chapters in Northern California, Utah, Idaho, Colorado and Nevada once again came together to exchange ideas, report on activities, and discuss future plans.

“As part of the organization’s standard procedures, we hold regular policy meetings with our local chapters to brief them on our current priorities as well as to solicit feedback and input to better inform our strategy moving forward,” remarked ANCA-WR Chair Nora Hovsepian, Esq. “As a grassroots organization, it is important for us to foster inter-chapter unity and relationships as we continue to inspire one another in our mission to advance the Armenian Cause.”