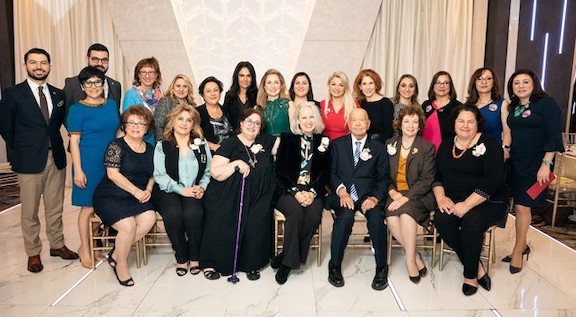 In an effort to bring education to the frontline, in early 2014, the Armenian National Committee of America – Western Region established its Education Committee, which is comprised of dedicated community members and professionals from the field. The Committee fosters and maintains relations with officials, administrators and representatives from community based organizations that deal with education and youth matters, and its work forms the basis for one of the ANCA-WR’s main priorities.

Last year, the Education Committee went above and beyond its expected goals. In February 2020, hundreds gathered to celebrate and honor seven outstanding educators for their dedication to teaching the Armenian Genocide in California public schools at the fourth annual Armenian Genocide Education Awards Luncheon. This event once again celebrated educators who have creatively taught the Armenian Genocide within their school communities, across different courses such as social science, English language arts, music, art, theater and film. These educators included Dr. Richard G. Hovannisian, Dr. Maria Armoudian, Jennifer Davis, Dr. Michelle Herczog, Susan Quintana, Saakanoush Markarian, and Nancy Nazarian. At the event, a special keynote address was delivered by Ani Hovannisian-Kevorkian and KTLA 5 News Reporter Ellina Abovian, who served as the Master of Ceremonies.

In the following months, members of the Committee were invited to numerous public high schools and middle school classes virtually to present about the Armenian Genocide and Artsakh to the students. The presentations focused on teaching the students about the humanitarian relief efforts of the Near East Relief, in order to educate them about the major role of millions of Americans in rescuing hundreds of thousands of refugees and orphans who survived the Armenian Genocide. The committee also addressed a letter to the University of Utah President and Board of Directors regarding Genocide Denial.

In October of 2020, the LAUSD Board of Education unanimously voted to give families across the district the day off on April 24 to observe and remember the start of the Armenian Genocide and called out Azerbaijan’s coordinated aerial and missile attacks against Artsakh’s civilian population in the midst the COVID-19 pandemic and the moral equivalence between Artsakh and Azerbaijan as the latter continued its indiscriminate shelling of Artsakh’s civilian population and infrastructure. Several resolutions were also adopted by other school districts that condemned the attacks by Azerbaijan and highlighted their solidarity with their Armenian student body.

In 2021, the ANCA-WR Education Committee launched its own website that is designed to provide the ultimate user-friendly experience to educators. The website consists of fact sheets, media and book lists, and lesson plans with teacher guides and presentation slides on the Armenian heritage, Armenian Genocide, and Artsakh.

The ANCA-WR Education Committee as well as the Ethnic Studies Curriculum Task Force continued to be actively engaged in ensuring the voices of over 1 million strong Armenian-Californians are heard and the Armenian experience is part of the Ethnic Studies Model Curriculum (ESMC). The Armenian-American community was actively engaged with the California Department of Education, submitting tens of thousands of public comments over this process and demonstrating the importance of this issue. In the final version of the curriculum, released in 2021, the California ESMC included the story of the Armenian-American community.

The committee also worked with several teacher and educator associations throughout the year. Thanks to their network, the California Teacher’s Association (one of the largest and most powerful teachers’ unions in the country with over 300,000 members and a high political profile in California politics) released a statement “standing in solidarity with the Armenian Community in denouncing in the strongest possible terms the aggressions and war crimes committed in Artsakh by the Azerbaijani government.”

In February of 2021, the American Federation of Teachers adopted a resolution that formally recognized the Armenian Genocide and called on the leadership to publish an article and classroom resources for 1.7 million members.

In April of 2021, several professional development workshops organized in collaboration with the office of LAUSD President Kelly Gonez focused on effective methods for implementing Armenian Genocide education in classrooms and promoting cross-cultural understanding in the community.

In May of 2021, the National Education Association released a statement supporting President Biden’s recognition of the Armenian Genocide and encouraged educators to teacher their students about diversity, overcoming adversity, and taking a stand in the face of prejudice.

In July of 2021, the National Education Association also passed a resolution affirming that it will share resources with educators to promote teaching about the Armenian Genocide.

Earlier this month, the ANCA-WR Education Committee convened its final meeting of the 2020-2021 year. The meeting consisted of review and extensive discussion of the events and projects organized during the year and culminated with the election of the 2021-2022 Executive Board. The newly elected board consists of the following members: Alice Petrossian (Chairperson) (Education Consultant/Retired  GUSD and Pasadena Deputy Superintendent, Association of California School Administrators Partnership Executive), Sedda Antekelian (Vice-Chairperson) (Education & Outreach Specialist at USC Shoah Foundation & a Doctoral Student), Taline Arsenian (Treasurer)(GUSD Educator), and Laura Gaboudian (Secretary) (GUSD ELA/ELD Specialist & Author).