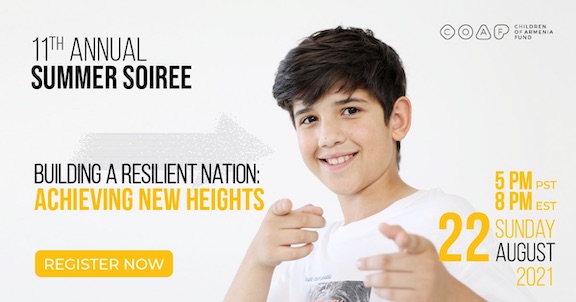 LOS ANGELES—The 11th Annual Children of Armenia Fund Summer Soirée will take place virtually this year. This year’s fundraiser titled “Building a Resilient Nation: Achieving New Heights” will be hosted by Araksya Karapetyan of Good Day L.A. on FOX 11 Los Angeles, who also hosted the Annual COAF Holiday Gala in 2019 in New York City, the COAF Summer Soiree this past August as well as our “Moving Mountains” fundraiser in 2020. Accompanying Araksya will be renowned auctioneer Gabriel Butu. The Soirée will be held on Sunday, August 22 at 5:00 p.m. PST (8:00 p.m. EST).

The COAF SMART Village Model will be the focal point of this year’s Soiree. COAF’s holistic approach to advancing rural communities in Armenia over the past 17 years will now take on new heights through large-scale infrastructure improvements, business development initiatives, and hands-on capacity building. The first COAF SMART village will be the community of Debet where COAF’s flagship SMART Center was built over two years ago. The organization intends to replicate this model in other rural communities facing depopulation.

COAF has taken a pioneering role in the development of rural Armenia and spurred innovation and change in beneficiary communities with stunning speed. However, the pandemic and attack on Artsakh have once again underscored how vulnerable rural Armenia is and the urgency of building strong and thriving ecosystems.

Armenians worldwide are encouraged to register for free to watch the virtual event by visiting the website where you can also donate to support COAF’s ongoing education, health, social and economic programs in over 60 villages.