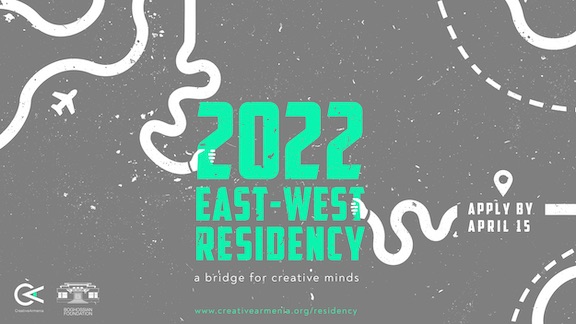 Cutting-edge Armenian creators across all the arts are welcome to apply.

Creative Armenia and the Boghossian Foundation announced the 2022 edition of the East-West Residency, a one-month creative residency at the cultural haven of the Villa Empain in Brussels.

In August 2022, three cutting-edge artists from Armenia will head to the Villa to meet their European counterparts, explore and create in Brussels, bring Armenian culture to the European art scene, and return to Armenia to pursue their new creations.

“We are proud of Armenia’s extraordinary artists,” said Garin Hovannisian, founding director of Creative Armenia. “And we are delighted to be encouraging a new season of their creation and collaboration in Europe.”

“The Villa is once again pleased to open its doors to Armenia,” said Louma Salamé, General director of the Boghossian Foundation. “We look forward to welcoming the 2022 East-West Residents in Brussels very soon.”

Applications for the 2022 East-West Residency are now open for all artists and creators residing in Armenia. Learn more about the program and apply by the April 15 deadline online.

The East-West Residency is a collaboration of Creative Armenia and the Boghossian Foundation, which entered into a partnership in 2018. Creative Armeniais a global arts foundation for the Armenian people that discovers, develops, and champions innovative talents across the arts. The Boghossian Foundation was created in 1992 by Robert Boghossian and his two sons, Jean and Albert, jewelers of Armenian origin, with the primary objective of contributing to development and education.