Arisian Sworn in as Syria’s Ambassador to Armenia 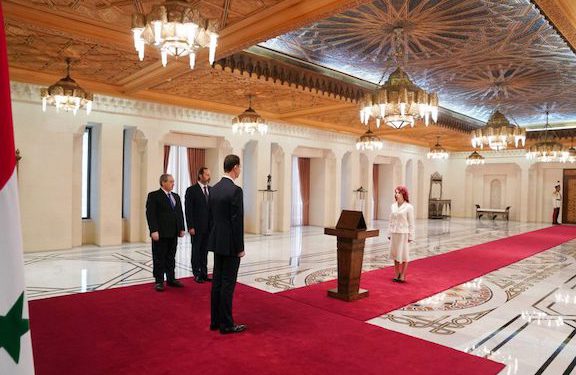 Dr. Nora Mardiros Arisian was sworn in the presence of President Bashar al-Assad of Syria as the country’s ambassador to Armenia on Tuesday.

Following the oath ceremony, al-Assad met with Arisian and wished her well on her new tour in Armenia.

Arisian, who is currently serving in her second term as one of two representatives of the Armenian community in Syria’s parliament, previously was a member of the legislature’s foreign affairs and human rights committees. She also chaired the Syrian-Armenia inter-parliamentary friendship group.

In 2019, Arisian served on the commission for constitutional reforms in Syria.

Arisian has done considerable research of the Armenian Genocide. Her work served as a basis for the Syrian parliament’s recognition of the crime.

In 2019, she made a presentation at a special conference on reforming history textbook in Syrian public schools. Her presentation and suggestions to include the teaching of Armenian Genocide were adopted by Syria’s education ministry and were included in history textbooks by the country’s curriculum development center.

‘Not Since the Genocide Have We Faced Such An Existential Threat As We Do Today,’ Says ANCA-WR Chair Nora Hovsepian