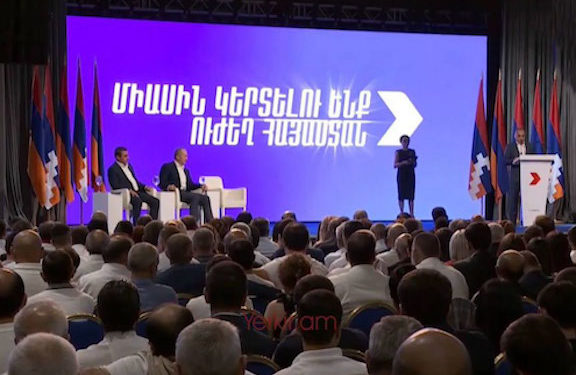 The opposition Armenia (Hayastan) Alliance, led by former president Robert Kocharian, announced Thursday that in the coming days it will ask Armenia’s Constitutional Court to annul the results of the June 20 snap parliamentary elections.

The Armenia Alliance, which also includes the Armenian Revolutionary Federation, questioned the validity of the election results almost after the voting ended in Armenia and ballots were being counted. It said that based on information they had on the ground the official results did not match the number of infractions the alliance proxies had witnessed, adding that the government used state levers to commit wide-scale fraud during the election.

The final official results published Sunday by Armenia’s Central Electoral Commission concluded that the Armenia Alliance had won 21 percent of the polls, allowing it 29 seats in the new parliament. By contrast acting prime minister Nikol Pashinyan’s Civil Contract party cleared 54 percent of the voter, according to CEC results. Former President Serzh Sarkisian’s opposition Pativ Unem (I Have Honor) alliance, which finished a distant third in the polls, also plans to appeal to the court.

“The ability by the authorities to operate without restraints must be stopped,” said an announcement issued by the alliance on Thursday. “We need to prove that these authorities represent the most corrupt government in Armenia.”

“The alliance garnered nearly 300,000 votes and will definitely stand up for those votes and won’t betray its voters. Our struggle will continue,” said the Armenia Alliance on Thursday.

At the alliance first congress on Tuesday, Kocharian said that the June 20 parliamentary elections did not end the post-war political crisis in Armenia and that another snap vote will have to be held by the end of next year.

“The crisis cannot be deemed resolved because the team that caused the crisis remains in power. In essence, the pre-term elections did not serve the purpose of their conduct,” Kocharian said.

“This means that we won’t have answers [to the questions about] why we lost [the war in Nagorno-Karabakh], why we suffered 5,000 casualties … Do you think that in the absence of answers to these questions we can have internal political solidarity and stability in Armenia? No, we can’t, we can’t,” Kocharian told hundreds of Armenia Alliance activists who had come together for the group’s first congress.

“My forecast is that we are very likely to have early elections in about one and a half years from now,” he added in his remarks, saying that Armenia’s voters were confused,

Saying that the Armenia Alliance will become a “radical opposition” to the government, Kocharian also told supporters that Pashinyan has no intention to change his confrontational attitudes toward opposition forces and will continue “persecuting” them.

“We will combine our parliamentary efforts with a fight in the streets and a fight through the media,” Kocharian added.