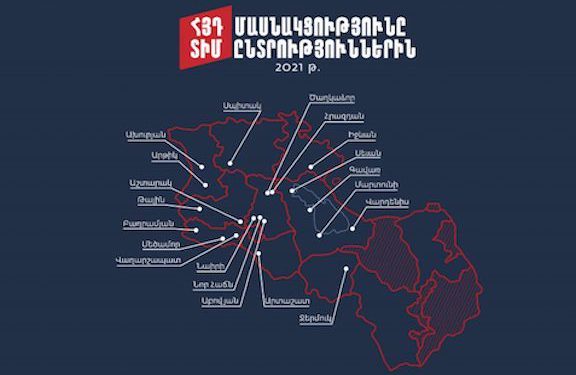 ARF in Armenia will take part in Dec. 5 municipal elections

The Armenian Revolutionary Federation Supreme Council of Armenia announced on Tuesday that the party will have its own slate of candidates who will compete in local elections in large communities throughout Armenia. The elections are scheduled for December 5.

The ARF previously had announced that it was running in local city council elections on November 14 in Ijevan, in Armenia’s Tavush Province

The ARF will have its own candidates in the December 5 local elections in Ashtarak in the Aragatsotn Province; Artashat in the Ararat Province; Metsamor in the Armavir Province; Sevan in the Gegharkunik Province; Spitak in the Lori Province; Artik in the Shirak Province; as well as in the cities of Abovyan, Hrazdan, Nairi and Nor Hadjn in the Kotayk Province.

The ARF Supreme Council of Armenia also announced that the party will take part in other municipal races through electoral alliances. Those ares include the cities of Gavar, Vardenis, Martuni, Vagharshapat and Baghramyan in the Armavir Province; Tsaghkadzor in the Kotayk Province, Akhuryan in the Shirak Province, as well as the cities of Talin and Jermuk in the Vayots Dzor Province.