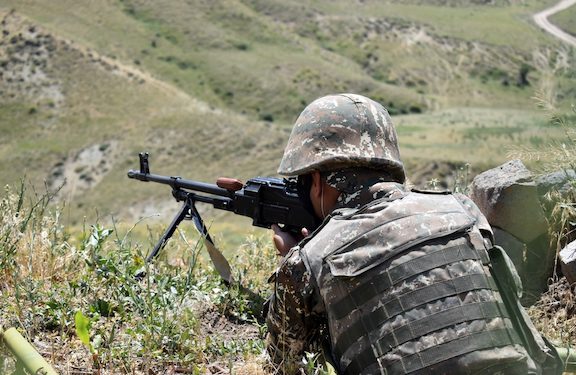 Armenia and Artsakh on Tuesday condemned Azerbaijan’s continued provocations and attacks on Armenian positions both with the two republics.

Citing Azerbaijani attacks in Gegharkunik and the Yeraskh region of the Ararat Province, which resulted in the deaths of Armenian soldiers Vahan Tatosyan and Arman Hakobyan on Monday, Armenia’s Foreign Ministry, in a statement, condemned the continues attacks by Azerbaijani forces, which also injured another Armenian soldier on Tuesday.

The foreign ministry noted that “these actions are accompanied by threats by the Azerbaijani top leadership toward the sovereignty and territorial integrity of Armenia and use of force against Artsakh.”

“We strongly condemn Azerbaijan’s provocations, which are clearly aimed at undermining the efforts toward de-escalation and hinder  regional security and peace. The attacks are also meant to prevent the resumption of the peace process under the auspices of the OSCE Minsk Group Co-Chairs, as well as disrupt the efforts to unblock regional communication,” said Armenia’s foreign ministry.

“The Republic of Armenia will continue to defend its sovereignty and territorial integrity, the right of the people of Artsakh to self-determination and life in their homeland,’’ said Yerevan.

Babayan dismissed Baku’s accusations that Armenia is deploying its armed forces into Artsakh.

“There is no movement or deployment of troops from the Armenia side,” Babayan told Armenpress, adding that that both the Azerbaijni military actions, as well as statements emanating from Baku seek to achieve the same goal: to exert psychological pressure and intimidate the residents of Artsakh.

Babayan accused Baku of attempting to undermine Russian-Armenian relations, as they lay the groundwork for cutting communications between Armenia and Artsakh.

He said Baku’s statements must be taken seriously and urged the international community to pay attention to Azerbaijani provocations.

Babayan praised the Russian peacekeeping forces and explained that when stressed that when “Armenian forces” or “Armenian formations” are mentioned, it should be remembered that the phrase also implied and includes the Defense Army of Artsakh, which, he said, is the guarantor of the Artsakh population’s security.