Armenia Calls for Immediate Withdrawal of Mercenaries From Region 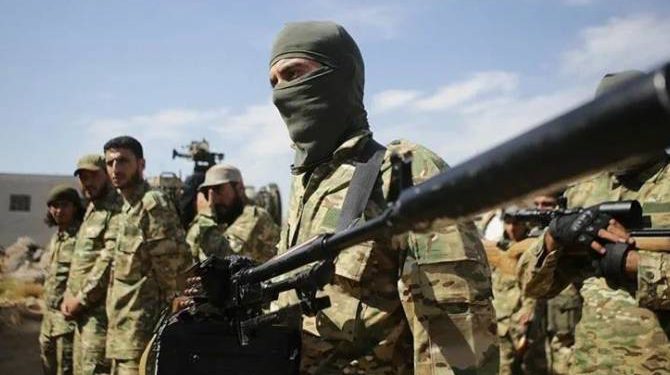 All foreign mercenaries brought into the Nagorno Karabakh conflict zone by Turkey and Azerbaijan should immediately and completely be withdrawn, Armenia’s Foreign Minister Ara Aivazyan said in an interview to RIA Novosti.

“The Azerbaijani leadership’s decision to transform their own country into a Turkish satellite and a terror cluster is a serious threat not only to the region’s security but also international security,” he said.

Aivazyan emphasized that the fact that foreign militants are present in Azerbaijan has been confirmed and acknowledged by various countries and international organizations. At the same time, Turkey’s role in transferring the mercenaries to Azerbaijan has been clearly underscored.

Aivazyan recounted that several foreign fighters have been taken into custody in Artsakh and these mercenaries have admitted, in their testimonies to law enforcement agencies, that they had been paid to fight for the Azerbaijanis. “The criminal cases have been given to relevant judicial bodies,” he said.

The foreign minister said that Turkey’s role in the Karabakh conflict has been unproductive, especially during Azerbaijan’s aggressive attacks against Artsakh. He said that this became explicitly evident when during the war Turkey deployed terrorists and militants from the groups it controls in the Middle East to fight against Artsakh, as well as during its active arms supplies to Azerbaijan.

“We expect a more targeted influence from the international community so that Turkey revises its explicitly aggressive attitude toward Armenia and the Armenian people,” Aivazyan said in the interview.

“Turkey, who overtly sponsored the activities of Middle Eastern terrorists in Artsakh, utilized its military personnel and combat drones against the peaceful population of Artsakh, has already proven not only the level of its involvement in the conflict but also how far away it is from the negotiations process,” said Aivazyan, adding that only the OSCE Minsk Group co-chairs can be involved in the Karabakh settlement process.

“In this regard our point of view remains unchanged—crucial issues for peaceful resolution [of the Karabakh conflict] are still not solved,” explained Aivazyan who said that Azerbaijan’s war of aggression against Artsakh is a challenge to the entire international community and it is harming the mediation efforts and the reputation of the UN Security Council-member Co-Chairing countries.

On the issue of prisoners of war, Aivazyan said Armenia has returned all Azerbaijani captives pursuant to the “all for all” principle enshrined in the November 9 agreement, adding that Azerbaijan continues to create “artificial and groundless” obstacles and is refusing to return the Armenian servicemen and civilians held in their custody as POWs.

“The Azerbaijani side is manipulating the list of Armenian captives and is refusing to accept the fact that it is holding Armenian servicemen and civilians captive. Moreover, Baku is initiating fake criminal proceedings on fabricated charges against several prisoners of war. Azerbaijan’s behavior not only contradicts the norms of international law, but is also a breach of the trilateral statement,” Aivazyan said.

The immediate and safe repatriation of all Armenian captives is a priority, he said, explaining that Azerbaijan’s continued refusal to return POWs poses a challenge to Russia, which is the guarantor of the November 9 agreement.

“The essence of the Karabakh conflict is the issue of the self-determination of the people of Artsakh. This right cannot be pressured or frozen through force. Armenia was and will further be in favor of the recognition of the right to self-determination and security of the people of Artsakh. Under no conditions or status can Artsakh be under Azerbaijani jurisdiction. The latest Azerbaijani aggression once again proved that an Artsakh within Azerbaijan would mean an Artsakh without Armenians,” explained Aivazyan.

The foreign minister cited the ethnic cleansing targeting the Armenian population in major cities of Azerbaijan in late 1980s and early 1990s, as well as the war crimes and mass atrocities committed by Azeri troops against Armenians in the 2020 Karabakh war, namely in Hadrut, to emphasize that only the right to self-determination can safeguard the life and security of the Armenian population on their own historic land.