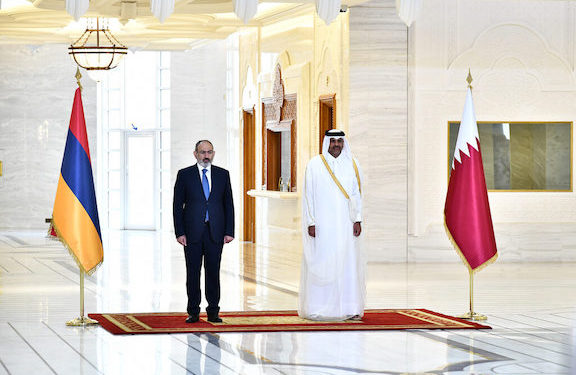 According to Pashinyan’s press service, al Thani emphasized the importance of the Armenian prime minister visit to Qatar and stressed the need for multifaceted cooperation between the two friendly countries. Al Thani expressed confidence that cooperation between the governments of Armenia and Qatar will reach a new level as a result of this visit.

Pashinyan noted that political dialogue between Armenia and Qatar is at a high level, and it is necessary to give a new impetus to the development and expansion of bilateral economic ties. Pashinyan also emphasized the need to develop and deepen business relations and invited representatives of Qatar’s business community to Armenia to discuss opportunities and prospects for joint investment projects with Armenian partners.

The sides also discussed cooperation in the education sector, including student exchange, science, as well as healthcare and culture. The broad potential for developing ties in all of the above areas was highlighted, for the implementation of which the prime ministers of the two countries gave specific instructions to the heads of the relevant government departments.

Based on the result of the meeting, a number of documents were signed between the two countries in the presence of the two prime ministers.

Armenia’s Deputy Prime Minister Hambardzum Matevosyan and Deputy Prime Minister, Minister of Foreign Affairs of the State of Qatar Sheikh Mohammed bin Abdulrahman Al Thani signed a memorandum of understanding on holding political consultations between the foreign ministries of Armenia and Qatar. Another MOU was signed on exchange of news between the Armenpress news agency and the Qatar News Agency.

Armenia’s Minister of Education, Vahram Dumanyan and his Qatari counterpart Buthaina bint Ali Al-Nuaimi signed an agreement on cooperation between Armenia and Qatar in the field of education, higher education and scientific research.

The health ministers of both countries, Anahit Avanesyan and Hanan Mohamed Al Kuwari signed an agreement on cooperation in the field of healthcare between. A similar cooperation agreement also was signed by Yerevan State University director Hovhannes Hovhannisyan and President of the University of Qatar Hassan Bin Rashid Al-Derham.

Pashinyan also met with Mansoor Al-Mahmoud, the CEO of the Qatar Investment Authority and visited the Qatar Foundation in Doha.

Board of Regents Condemns Attacks on Armenian Schools’ Integrity, Commitment to Homeland