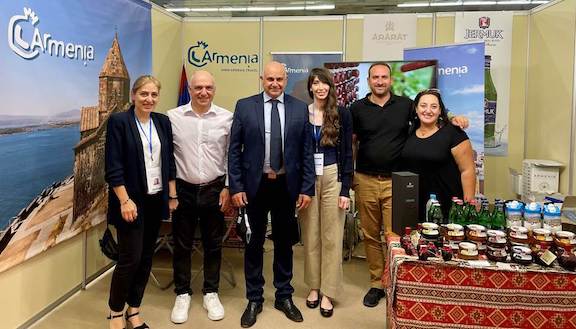 TIF was the first major exhibition to be organized in Europe in 2021 and Armenia focused on promoting Armenian products, tourism as well as investments in several fields of the Armenian economy such as agriculture, renewables, financial services and capital markets.

The widest ever range of Armenian products was presented at the Show, including the legendary brandy ArArAt, the world famous Zulal, Armenian Wine, Karas, Arame wines, legendary Zorah (one of the best 10 wines of the world according to Bloomberg), the multi-award winning Kilikia beer, Jermuk and Bjni mineral waters, Noyan Premium juices as well as the innovative AWI Watches. Capital markets were presented by Armenbrok, the leading brokerage firm of Armenia and its associates in Greece.

The nine-day exhibition attracted thousands of Greek and non-Greek visitors including a lot of diplomats from several countries such as Italy, Cyprus, Luxemburg, Romania, Poland, Morocco, Vietnam and Bangladesh who showed special interest in the Armenian wines exhibited while the exhibition booth was also visited by ministers and members of parliament from Cyprus and Greece who expressed the fraternal relations between Greece, Armenia and Cyprus.

Armenia’s participation was organized by the Hellenic-Armenian Chamber of Commerce and Industry of Greece under the auspices of the Embassy of Armenia to the Hellenic Republic.