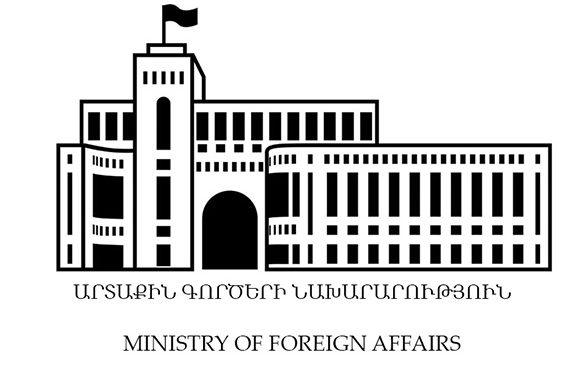 YEREVAN (Azatutyun.am)—Armenia and Turkey are not yet holding any negotiations on normalizing their relations, the Armenian Foreign Ministry said on Monday.

Prime Minister Nikol Pashinyan raised the possibility of such a rapprochement when he spoke on August 27 of “some positive signals” sent by the Turkish government of late and said his administration is ready to reciprocate them.

Turkish President Recep Tayyip Erdogan responded by saying that Ankara is open to normalizing ties with Yerevan. But he appeared to echo Azerbaijan’s demands for a formal Armenian recognition of Azerbaijani sovereignty over Nagorno-Karabakh.

Pashinyan described Erdogan’s statements as encouraging on September 8. He reiterated Yerevan’s readiness to embark on a dialogue with Ankara.

“At the moment no negotiations are being held for the purpose of normalizing relations between the two countries,” the Foreign Ministry said in a written statement to RFE/RL’s Armenian Service.

It said contacts between Armenian and Turkish diplomats are currently “limited to participation in multilateral discussions on various issues on the international agenda.”
The ministry did not comment on the possibility of Turkish-Armenian negotiations in the weeks or months ahead.

Armenia and Turkey came close to normalizing bilateral relations in 2009 when their foreign ministers signed two relevant protocols in Zurich, Switzerland in the presence of top U.S., Russian and European Union diplomats.

Ankara subsequently linked their ratification by the Turkish parliament to a Karabakh settlement. As a result, Armenia’s former government formally annulled the protocols in 2018.

Armenian opposition leaders and some analysts say Ankara continues to make the normalization of Turkish-Armenian relations conditional on a Karabakh settlement favorable to Baku. They say the Turks also want Yerevan to stop campaigning for a greater international recognition of the 1915 Armenian genocide in the Ottoman Empire.

Turkey provided decisive military assistance to Azerbaijan during the six-week war in Karabakh stopped by a Russian-brokered ceasefire last November. Azerbaijani President Ilham Aliyev again thanked Ankara for that aid when he and Erdogan visited in June the Karabakh town of Shushi captured by the Azerbaijani army.