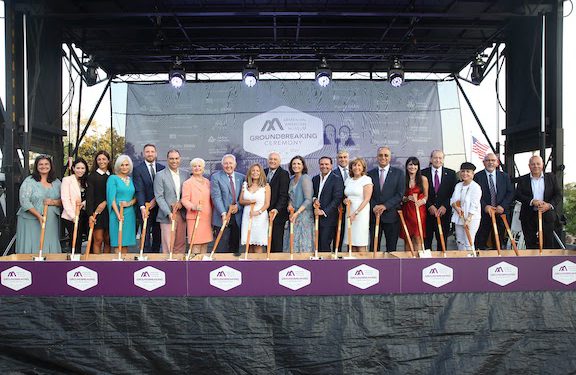 Board of Governors at Armenian American Museum Groundbreaking Ceremony

GLEDNALE—The Board of Trustees of the Armenian American Museum has appointed the inaugural Board of Governors to join the leadership team of the museum.

The Board of Governors is composed of philanthropic, business, and community leaders dedicated to promoting understanding and appreciation of America’s ethnic and cultural diversity by sharing the Armenian American experience. The individuals who serve on the Board of Governors share the vision of creating a cultural campus that enriches the community, educates the public on the Armenian American story, and empowers individuals to embrace cultural diversity and speak out against prejudice.

“We are thankful to the Board of Trustees for assembling a phenomenal group of leaders as we embark on the next major phase of the project,” stated Executive Chairman Berdj Karapetian.

“It is an honor to have the Board of Governors join the team and play a key role in shaping the future of the museum,” added Executive Vice Chairman Zaven Kazazian.

The Board of Governors representatives include:

The inaugural Board of Governors officially commenced in April 2021.

The Board of Governors will provide strategic guidance to the organization, advance the construction, programming, and operations of the project, and play a vital role in securing the financial resources necessary for the museum in collaboration with the Board of Trustees.