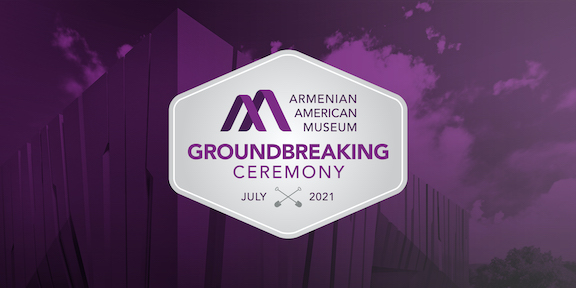 GLENDALE—The Armenian American Museum and Cultural Center of California has announced that the historic Groundbreaking Ceremony of the highly anticipated landmark center will be held on Sunday, July 11, from 4 to 7 p.m.

The Groundbreaking Ceremony will mark a major milestone for the community that has been years in the making, bringing together supporters, community leaders, and public officials from across the country and around the world in celebration and support of the cultural and educational center.

The signature event of the year will be hosted as a virtual ceremony and live broadcast to a worldwide audience from the future site of the museum at Central Park in Glendale, California.

Museum officials invite the public to participate in the historic event by watching the ceremony via television, social media, and streaming channels.

“We are truly excited to announce the historic Groundbreaking Ceremony of the Armenian American Museum on July 11,” stated Executive Chairman Berdj Karapetian. “We look forward to celebrating the momentous milestone with our supporters from across the country and around the world as the cultural and educational center officially begins construction.”

The Armenian American Museum was born in 2014 when the Armenian Genocide Centennial Committee Western USA officially adopted the museum as its landmark project to honor the memory of the 1.5 million martyrs who perished in the Armenian Genocide and to help build and define the next centennial of the community as a message of strength, perseverance, and hope for future generations.

The Armenian American Museum will rise to a two-level 50,820 square foot museum complex built on a one-level semi-subterranean parking garage. The first level will feature the grand lobby, auditorium, learning center, demonstration kitchen, gift shop, and administrative offices. The second level will be dedicated to the permanent and temporary exhibition galleries as well as the collections archives.

The cultural and educational center’s programming plans include producing and hosting powerful, immersive, and thought-provoking permanent and temporary exhibitions, leading meaningful dialogues and discussions through engaging public programs, providing educational programs for adults, youth, kids, and families, preserving Armenian heritage through the museum’s collections and archives, and serving as an iconic venue for memorable experiences, gatherings, and celebrations.

Special guests and additional details for the Groundbreaking Ceremony will be announced in the coming weeks.

Sponsorship opportunities are available to support the highly anticipated event and historic project.