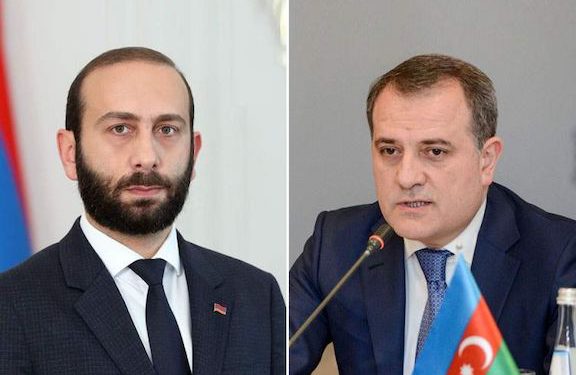 The foreign ministers of Armenia and Azerbaijan, Ararat Mirzoyan and Jeyhun Bayramov, met Wednesday in Paris in a meeting attended by the OSCE Minsk Group co-chairs and facilitated by France’s Foreign Yves Le-Drian.

“Today in Paris I gathered my counterparts from Armenia and Azerbaijan to help reduce tensions,” Le Drian said in a Twitter post. “We do not forget the victims of the war that broke off a year ago.”

The OSCE Minsk Group Co-Chairs, Andrew Schofer of the U.S., Igor Khovaev of Russia and France’s newly-appointed representative to the body, Brice Roquefeuil issued a statement after the meeting saying that the Personal Representative of the OSCE Chairperson-in-Office (PRCiO) Andrzej Kasprzyk also was in attendance.

“The Co-Chairs and Foreign Ministers continued the discussions begun in New York on a number of possible deescalatory measures and next steps in the process, including future meetings in this format and the Co-Chairs’ proposed visit to the region. The Co-Chairs and the Ministers also discussed the status of the implementation of the commitments made in the November 9 trilateral statement,” said the statement.

“The Co-Chairs reiterated the importance of making progress on humanitarian issues — including, inter alia, detainees, demining, missing persons, voluntary return of displaced persons, and protection of historic and cultural sites — and called on the sides to provide unrestricted access to international humanitarian organizations. The Co-Chairs also stressed the importance of avoiding inflammatory rhetoric and provocative actions,” explained the statement.

“The Co-Chairs met with representatives of the French Ministry of Foreign Affairs and the Elysee on November 10 and 11 to discuss their ongoing efforts to help the sides find comprehensive solutions to all remaining issues related to or resulting from the Nagorno-Karabakh conflict in accordance with their mandate,” added the statement.

The co-chairs held a separate meeting with Mirzoyan on Monday, on the margins of the UNDP Summit currently underway in the French capital.

Mirzoyan stressed that a comprehensive and lasting settlement of the Nagorno-Karabakh conflict can be achieved only through peaceful means under the mandate of the OSCE Minsk Group Co-Chairmanship on the basis of the principles and elements well-known to the sides.

The importance of the Co-Chairs’ visit to the region was underlined in the context of assessing the situation on the ground. During the meeting the sides emphasized the priority of implementing concrete steps toward the de-escalation of the situation in the region․ To this end, Mirzoyan condemned the attacks on the civilian population of Artsakh, which resulted in casualties, as well as Baku’s ongoing Armenophobic rhetoric.

Mirzoyan also discussed the urgent need to address humanitarian concerns arising from the war. Mirzoyan emphasized the imperative for the immediate and unconditional return of all Armenian prisoners of war, hostages and other captives currently being held in Azerbaijan, as well as clarification of the fate of missing persons and preservation of the Armenian historical-cultural heritage.

Deep Roots: A Ferrahian Student’s Bond to a Motherland a World Apart