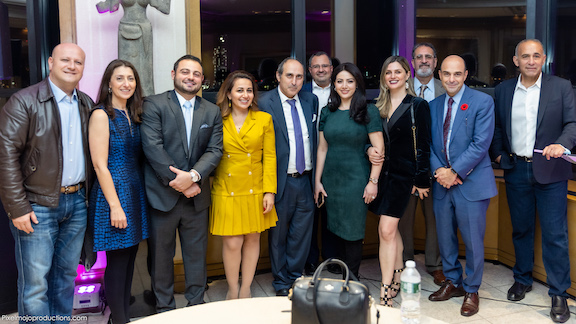 New York City seldom disappoints and often dazzles, just as it did when it played generous host to the Armenian Bar Association’s 32nd Annual Meeting from November 5 to 6.

The weekend was marked by a deep sense of camaraderie, commitment and collegiality among the many lawyers, law students and judges in attendance who assembled in-person for the first time in two years because of the worldwide pandemic.

Picking up right up where it had left off, the Annual Meeting Weekend began with a marvelous welcome reception, followed by captivating panel discussions, meaningful reports on the Association’s activities, and the election of new board members and executive officers.

Seemingly straight out of an episode of “Million Dollar Listing New York,” the site for the Friday evening welcome reception was a roof-top oasis perched high above the Manhattan side of the East River, overlooking the shimmering lights of the outer boroughs. The stunning horizon was made possible by long-time Armenian Bar devotee and strategist, Emma Arakelian, and her husband, Tiran Nalbandyan, who are stakeholders in that magical residential tower.

Approximately 150 members and guests were on hand for an evening holding both somber remembrances and joyful delights, all the while chock-full of sumptuous Armenian food and fine Armenian wines.

The next day, Midtown Manhattan—and more precisely the intersection of Madison Avenue and 43rd Street—was transformed into Armenian Bar headquarters for the panel discussions, the business and board meetings, and the election of officers.  The spacious, high-ceilinged, and comfortable auditorium was secured through the good graces of Taline Sahakian and Grant Petrosyan of Constantine Cannon LLP, which maintains its New York office in the same landmark location. Two solid panel discussions anchored the Saturday daytime legal education platform in that space.

The first program, entitled “Accountability and Recourse under United Nations Treaty Bodies,” was moderated by Levon Golendukhin of Eversheds Sutherland (US) LLP and galvanized by Alexander Bedrosyan of Hughes Hubbard & Reed LLP and Astghik Hairapetian, Law Clerk at the U.S. District Court for the Southern District of Texas. Their discussion offered a primer on the sophisticated and timely topics of international human rights law and international humanitarian law, which sound similar but carry distinct characteristics.

The panelists also highlighted the rights of individuals under various human rights treaties, including the Convention on the Elimination of All Forms of Racial Discrimination (CERD), which is the bedrock of the Armenia vs. Azerbaijan state-to-state action currently pending before the International Court of Justice. CERD is also the legal framework of an Armenian Bar-supported petition to the responsible United Nations Committee on behalf of individual victims of Azerbaijan’s illicit war of aggression against Artsakh.

The second continuing legal education presentation, entitled “Free Speech on the Roberts Court and the Trump Court,” proved to be fully satisfying for practitioners and students in the field of First Amendment law, and equally gratifying for newcomers to the area. In the tradition of the best of professors who teach with uncomplicated, understandable, and relatable methods, Professor Gregory Magarian explained how the United States Supreme Court influences the quality of our public discussion insofar as it has the ability to define the scope and power of the First Amendment.

Interestingly, Professor Magarian, who teaches Constitutional Law at Washington University School of Law in St. Louis, explained how First Amendment legal doctrine is fundamentally formed not so much by the judicial branch which draws its brought outlines, but rather in political/social contexts as we experience them. Professor Magarian is just one of a few Armenian-Americans who have served as judicial clerks to the United States Supreme Court, having worked as a judicial clerk for Justice John Paul Stevens. The presentation was moderated by Taline Sahakian of Constantine Cannon LLP.

During the ensuing business meeting which several dozen members attended both in-person and virtually, Chairwoman Lucy Varpetian presented a comprehensive report on the Association’s plentiful activities during the last year. The overview homed in on the current status and future plans for the Association’s pro bono clinics, domestic violence initiatives, mentorship and student outreach programs, and, in particular, on the mobilization of a great many Armenian Bar members during and following the 44-Day War in an effort to mount legal challenges to the wide spectrum of unlawful trespasses experienced by the Armenian nation.

The business meeting concluded with elections for open positions on the Board of Governors. Every year, 5 to 6 members are elected for three-year terms to serve on the 18-member board.  Re-elected as governors are Karnig Kerkonian of Illinois, Mesrop Khoudagoulian of California, and Scott Ohnegian of New Jersey.  Elected for the first time to the board are Taline Sahakian of New York and Tigran Palyan of California who replace the expiring terms of Armenian Bar leaders and stalwarts Saro Kerkonian and Tina Odjaghian of California. Reflective of her enduring humility, board member Christine Engustian of Rhode Island offered her unexpired board seat to allow for the next generation of leaders to rise into the ranks of the Armenian Bar’s leadership. Los Angeles Superior Court Judge Amy Ashvanian, a catalyst of several important Armenian Bar initiatives, has assumed that board seat.