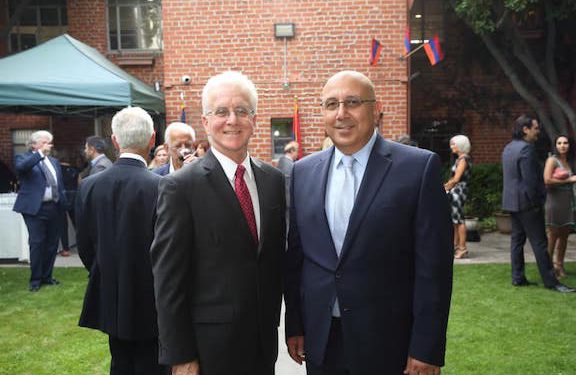 GLENDALE—Armenia’s Consulate General in Los Angeles hosted a reception on June 17 in honor of Los Angeles City Councilmember Paul Krekorian to express gratitude for the his consistent support of Armenia and Artsakh. The reception was attended by public, religious, political and cultural leaders and community representatives.

After welcoming remarks by Armenia’s Consul General in Los Angeles Ambassador Armen Baibourtian, remarks were delivered by Western Primate Archbishop Hovnan Derderian, Salpi Ghazarian, Director of the University of Southern California’s Institute of Armenian Studies, prominent lawyer Rafi Ourfalian, and State Assemblymember Adrin Nazarian. The speakers praised Krekorian for his efforts to advance the Homeland. All clergy present at the event said a prayer for Krekorian and his wife Dr. Tamar Krekorian.

In his remarks, Baibourtian highlighted the importance Krekorian’s activities and efforts for the City of Los Angeles, the State of California, the U.S. as well as Armenia and Artsakh in his capacity as a former member of the State Assembly and L.A. City Councilmember.

“There are many examples that attest to Paul Krekorian’s full and unwavering devotion towards the welfare and betterment of the Homeland of Armenia and Artsakh,” said Baibourtian.

Within the first days of last fall’s Artsakh War, Krekorian began to unite and consolidate California American political and state leaders in pursuit of ending the Azerbaijani unleashed war against Artsakh. As a result, and thanks to his efforts, on October 5, members of Congress and California lawmakers joined Los Angeles City Council members and leaders and other officials at a joint press conference that raised awareness about and condemned Azerbaijan’s aggression against Artsakh.

During the 44-day war and in its aftermath, thanks to Krekorian, the L.A. City Council unanimously adopted a resolution confirming the support of the City of Los Angeles to the people of the Republic of Artsakh. At Krekorian’s initiative, the Los Angeles City Council unanimously adopted yet another resolution, in which it demanded Azerbaijan to immediately release the Armenian prisoners of war and captured civilians. Moreover, November 9th was declared as a Day of Remembrance and Commemoration of the victims of Azerbaijan’s aggression against Artsakh.

Baibourtian added that “the continued support for Armenia and Artsakh also have a consolidating effect and a unifying role for the Armenian community of California”.

In his remarks, Krekorian stated: “My response to the kind words of commendation and encouragement expressed today would be very brief—I was just doing my job. We should always be with our Homeland and cherish it.”

In the concluding part of the program, Anna Mouradian, Chief of Staff of LA County Supervisor Kathryn Barger, presented certificates of appreciation to Krekorian and his spouse, Tamar on behalf of the Los Angeles County Board of Supervisors.

During the event, Armenian folk music was performed by duduk player Jivan Gasparyan Jr., the grandson of the world-famous Jivan Gasparyan, as well as guitar player Andranik Kzirian.

Armenia Alliance Will Take Up Parliament Seats Despite Election Challenge