Armenian Couple Ties the Knot on Top of Mt. Ararat 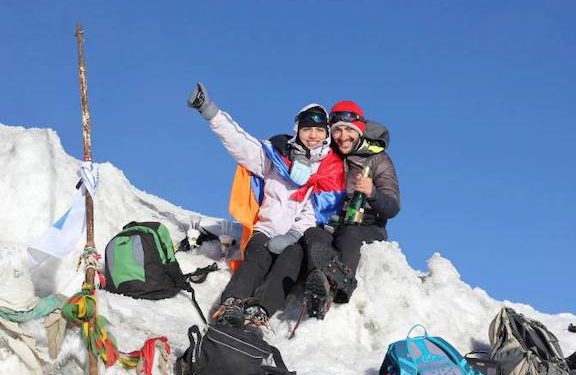 A young Armenian couple held their wedding ceremony on the peak of Mount Ararat, Armenpress reported.

Location of Ceremony: Peak of Mount Ararat; Attire: Hiking clothes; You are Invited to a Wedding. This is how Ishkhan Gevorgyan and Ashkhen Hovhannesyan announced the details of their wedding.

According to the news outlet, the couple decided to hold the ceremony on Mount Ararat, because they both enjoy the outdoors, especially hiking and climbing mountains.

In an interview with Armenpress, Ashkhen explained how Ishkhan suggested that they partake in a trekking tour of Mount Ararat on their special day instead of organizing the event at a resort.

“We had talked about our dream of climbing Masis several times,” said Ashkhen. “Most Armenians dream of climbing Mount Ararat—a desire that seems to stem from childhood. I used to always tell Ishkhan that we have go on a trekking tour of Mount Ararat once we’re married. One day, he said, ‘Let’s go and get married at the top of Masis, there couldn’t be a better wedding ceremony than this.’ And, of course, I agreed,” she added.

The couple’s dreams became reality when they reached the peak of Mount Ararat on August 26, 2018. Due to lack of oxygen, moving around at the peak is quite difficult and there’s always the chance that one may feel sick. However, nothing stopped the couple from following their dream. Ishkhan told Armenpress that very few people in the group were aware of their plans.

“Most of the members of the group were only later informed about our plans,” said Ishkhan. “When we arrived at the peak, we told them that they were all invited to our wedding. Martin Martirosyan held the cross, and the others helped pour the champagne.”

Years have passed since the memorable day, but the young couple still remember their special day with smiles and excitement. They now use their experience as an opportunity to share their story with children who may have similar dreams, and who enjoy hiking as much as both Ashkhen and Ishkhan do.

The couple is guided by the following principle: If you love your country, you must know your country. As they discover different parts of Armenia and Artsakh together, they want to share their knowledge and experiences with others, especially non-profit initiatives.

According to Armenpress, the couple first met through Art of Staying Alive, a non-profit organization. Today, they are investing their time, energy, and knowledge in the Azatazen initiative by establishing a shooting range, which will aim to help Armenian youth get acquainted with the skills of using a weapon.

“We made the decision to create this initiative after the war,” said Ishkhan. “We had no place to train. Since there is no large shooting range in Armenia, we were traveling to the mountains to shoot, which can be risky.”

“Today there are many entertainment options in Yerevan, but there is no shooting range. With our friends who are skilled in combat, we decided to create Azatazen, a military-educational non-profit organization. It will offer lessons to individuals who want to get better acquainted with guns and ammunition,” said Ishkhan, adding that his wife, Ashkhen, is also actively involved in the project.