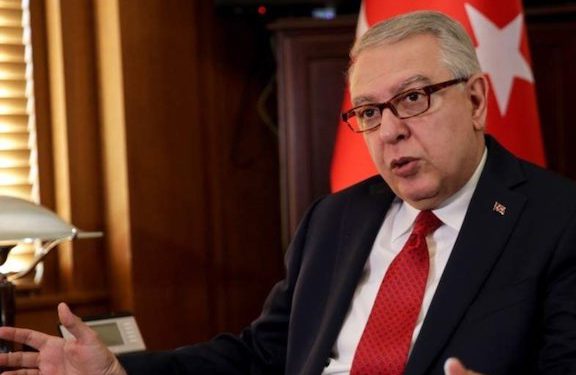 President Recep Tayyip Erdogan of Turkey has appointed Ankara’s former ambassador to the United States, Serdar Kilic, as it special envoy to negotiate the normalization of relations with Turkey, the country’s foreign minister announced on Wednesday.

Kilic was ambassador when Erdogan’s bodyguards violently beat up protesters in Washington during the Turkish president’s visit and meeting with former President Donald Trump. In fact, he impeded law enforcement operations at the time when he angrily confronted Washington police officers while the melee orchestrated by Erdogan was underway.

Calling him “a degenerate Armenian Genocide denier,” the Armenian National Committee of America posted a phot of Kilic yelling at a police officer during the 2017 protest in Washington’s Sheridan Circle.

Armenia has not announced the appointment of an envoy.

On Wednesday a Turkish journalist Cetiner Cetin provided details about the Turkey-Armenia normalization process in his column in Haberturk.

He claimed that by January 15, 2022, Armenia will have set up a task force and another group that will be in contact with Prime Minister Nikol Pashinyan.

“There will be a three-step roadmap between Armenia and Turkey. First, chartered flights will be launched. The key issue during the negotiations will be the opening of the Turkey-Nakhchivan-Azerbaijan corridor. Ankara wants to see the opening of the corridor by May-June. The economic relations will be established in the third stage, which will be launched in July,” Cetin wrote in his column.

Ankara is considering bids from Turkish and Armenian airlines regarding the opening of Istanbul-Yerevan flights, Turkish Foreign Minister Mevlut Cavusoglu told reporters following his visit to the UAE, the Anadolu Agency reported on Wednesday.

According to him, the applications of airlines are considered by the Ministry of Transport and the General Directorate of Civil Aviation of Turkey.

“Actually, the attitude of the Turkish side to the issue is positive. In the coming days, it will be determined which of the companies will be able to fly on this route,” Cavusoglu said.