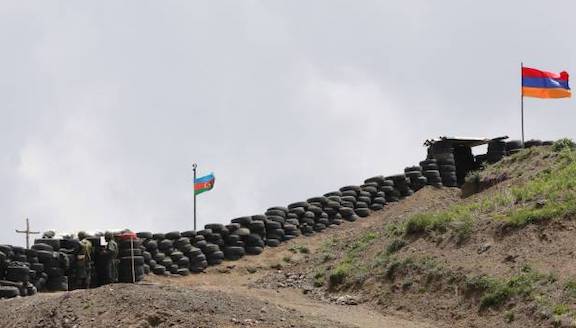 It did not take the Azerbaijani forces long to violate a fragile ceasefire brokered by Russia on Wednesday, after three Armenian soldiers were killed and four others were injured as a result of intense attacks by Azerbaijan on Armenia’s Gegharkunik province.

Armenia’s Defense Ministry said that at 3 a.m. local time on Thursday, Azerbaijani forces launched another attack on Armenian positions in Gegharkunik. An Armenian soldier suffered gunshot wounds as a result of the Azerbaijani shooting, which reportedly lasted until 9:30 a.m. on Thursday.

Armenia’s Health Ministry reported on Thursday that the condition of the soldiers who was injured on Wednesday was extremely serious.

“The soldiers injured as a result of the Azerbaijani provocation are in the hospital now. There are no changes in the health condition of the one that was in extremely serious situation,” Armenia’s acting Health Minister Anahit Avanesyan told the reporters after a cabinet meeting on Thursday.

The Governor of Armenia’s Gegharkunik province Gnel Sanosyan announced on Thursday that the Russian-owned Sotk gold mine had halted its operations, citing security concerns stemming from Wednesday’s attack by Azerbaijani forces in the area.

“The employees and some of the equipment of the Sotk mine have been removed for security purposes. The mine is not operating at the moment. It will probably resume operation when there are no security issues,” Sanosyan, who attended Thursday’s cabinet meeting, told reporters.

The Governor added that a section of the Kut village has been closed to reporters due to the same security concerns.

“The Azerbaijani side has somewhat advanced in the territory near the village of Kut since May 13-14,” said Sanosyan, adding that Wednesday’s attack prompted the decisions.