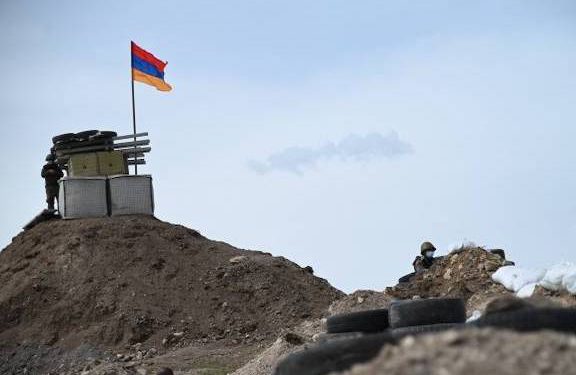 A soldier of Armenia’s Armed Forces was wounded on Tuesday when Azerbaijani forces continued their brazen attack on Armenia’s border positions in the Gegharkunik Province.

The defense ministry said an Azerbaijani soldier was killed and another wounded to the exchanged of gunfire.

In another border hotspot, Russia’s Ambassador to Armenia Sergey Kopyrkin visited the Yeraskh region in the Ararat Province, where an Armenia soldier was killed Monday from Azerbaijani shooting from positions in Nakhichevan.

Kopyrkin met with Russian and Armenian border troops and was provided tour of the section by Armenian defense ministry officials.

Kopyrkin is traveling across Armenia on vacation with this family, with whom he visited an archaeological excavation site in the Pokr Vedi village in the Ararat Province.

Visiting one of the outposts, Kopyrkin and his family laid flowers at the bust of border guard Koryakov, who died in a battle with saboteurs who had infiltrated from Turkey in 1948.

U.S. Ambassador to Armenia Lynne Tracy also announced earlier this month that she would be spending her vacation in Armenia’s Syunik Province, which has been breached by Azerbaijani forces when they crossed into Armenia’s sovereign territory.

Armenia’s Human Rights Defender Arman Tatoyan on Tuesday said Azerbaijan’s continue attack on Armenian border positions has been a “blatant violation of international norms from the very outset.” He added that Baku bears the responsibility for killing two Armenian soldiers in Yeraskh and Gegharkunik on Monday.

Tatoyan shared the following six points in a report he sent to international organizations and diplomats, saying Azerbaijani soldiers:

“Furthermore, the Azerbaijani authorities officially stated that their armed attacks, threats of war are aimed at exerting an internationally prohibited influence on the delimitation and demarcation processes of borders,” explained Tatoyan.