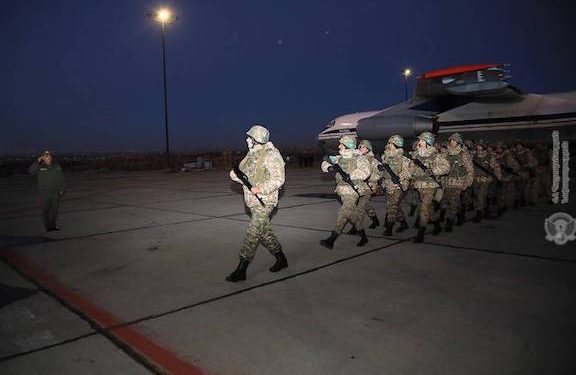 Armenian soldiers deplane after completing their mission in Kazakhstan

As the current president of the CSTO Security Council, Prime Minister Nikol Pashinyan dispatched 100 troops to Kazakhstan on January 7 as part of the group’s so-called peacekeeping mission. Protests over a proposed gas price hike in Kazakhstan turned violent, promoting the country’s president, Kassym-Jomart Tokayev to appeal to the Russia-led security organization for assistance.

The CSTO’s swift response to the crisis in Kazakhstan was unlike the collective’s response to Armenia’s appeal for assistance, which were rejected on two occasions—once during the 2020 war and again when Azerbaijani forces breached Armenia’s sovereign border in May.

Yet Tokayev, with the aid of Moscow, framed the events in his country as an effort by foreign terrorists to take control of the energy-rich Central Asian republic. Pashinyan on Monday convened a virtual summit of CSTO member-state leaders and Tokayev’s unsubstantiated claim of terrorist agenda, saying that Armenia was itself a victim of such foreign intervention when Turkey sent radical jihadists to fight alongside Azerbaijan during the 44-Day war.

On Friday, CSTO Secretary-General Stanislav Zas in an interview with the Russia-24 television channel that it was too early to speak of the “normalization of the situation in Kazakhstan,” Armenpress reported.

“The state of emergency is still in force, it has already been lifted in five regions, it will be lifted in a number of regions tomorrow,” Zas, who traveled to Kazakhstan this week, said. He added that restrictions are gradually being eased, which means that the country is returning to normal life.

“It seems a breakthrough has already taken place, but it would probably be premature to talk about the situation being resolved,” said Zas, who this week praised the swift response by the group.

The CSTO mission in Kazakhstan largely is seen as an effort by Moscow to flex its regional muscle in the wake of discussions with the United States and NATO about the prevention of a potential Russian invasion of Ukraine.

The U.S. and its NATO allies voiced concern about the CSTO mission. Ankara, however, flat out condemned Kazakhstan for appealing to the security organization.

Russia’s Foreign Minister Sergei Lavrov, during a press conference on Friday, called for an official clarification from Ankara for comments made by Turkey’s presidential advisor Ihsan Sener, the Tass news agency reported.

“There was, to put it mildly, an incomprehensible statement in Ankara by one of President Erdogan’s advisers, who simply condemned Kazakhstan’s actions with regard to the invitation of the CSTO. We have now asked our Turkish colleagues to explain what this means,” Lavrov told reporters.