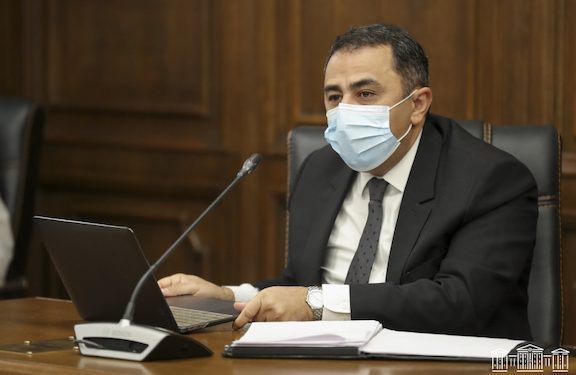 What happened during the first and second Artsakh wars clearly showed that the Armenians of Artsakh cannot live under Azerbaijani control, and will face eventual annihilation, Armenia’s Deputy Foreign Minister Vahe Gevorgyan told lawmakers on Thursday.

“What happened during both the first and second Artsakh wars clearly shows that the Armenians of Artsakh cannot live under Azerbaijani control. That is, because [Azerbaijan] is in fact engaged in a policy of extermination. The best proof of this is the total absence of Armenians in the territories presently controlled by Azerbaijan,” said Gevorgyan.

Armen Rustamyan, a member of the parliament’s Armenia bloc asked Gevorgyan whether there were plans for Armenia to give Artsakh “remedial recognition” under the principle of people’s right to self-determination.

In response to Rustamyan’s inquiry, Gevorgyan said that stated principle “is getting firm substantiation.”

“And I think that this approach, that the Armenians of Artsakh are facing annihilation under Azerbaijani control—this truthful, reliable and accurate narrativ—is being advanced by us in both our discourse and during negotiations,” added Gevorgyan, who added that Armenia will be consistent in restoring and protecting the rights of the people of Artsakh and will make every effort to guarantee their right to live safely and with dignity in their homeland.

He said that in relation to the Azerbaijan’s aggression against Artsakh in 2020 and Baku’s aspirations toward the sovereign territories of the Republic of Armenia, the foreign policy priorities remain the ensuring of the security of Armenia and Artsakh, the resolution of the Nagorno Karabakh conflict, as well as the establishment of regional peace and stability, and the process of unblocking transportation links.

“Armenia’s principled position regarding the Artsakh conflict has been expressed on numerous occasions. That includes a comprehensive and lasting resolution of the Nagorno Karabakh conflict, which can be achieved under the auspices of the only internationally mandated format–-the OSCE Minsk Group Co-chairmanship—based on the well-known principles and elements, which implies the determination of the final status of Artsakh taking into account the unbreakable right to self-determination of the Armenians of Artsakh,” Gevorgyan said.

In this phase, he prioritized the re-launching of the peace process under the OSCE MG Co-chairmanship, as well as prioritizing humanitarian issues, including the repatriation of Armenian prisoners of war, the determination of the fates of those missing or who are victims of forced disappearances, and the preservation of Armenian cultural heritage.

To that end, Gevorgyan said that process of the so-called unblocking of transport routes cannot take place at the expense of the security, sovereignty and vital interests of Armenia.

“Establishment of a peaceful and beneficial environment for co-existence in the region is also based on the unblocking of the region. Thus, the implementation of the January 11 trilateral statement is very important. The effective implementation of the unblocking process is possible if all players demonstrate a constructive stance and take practical steps. At the same time it’s important to note that this process cannot take place at the expense of Armenia’s security, sovereignty and vital interests,” Gevorgyan explained.

The deputy foreign minister announced that the top diplomats of Armenia and Azerbaijan will hold new meetings mediated by the OSCE Minsk Group Co-chairs and new conditions will be created for the complete re-launch of the peaceful resolution process of the Nagorno Karabakh conflict.

Gevorgyan cited a meeting in New York between the foreign ministers of Armenia and Azerbaijan and mediated by the Co-chairs as an example of the peace talks resuming, in response to another Armenia bloc lawmaker Anna Grigoryan.

“After the meeting, the Co-chairs issued a statement reiterating that they are working within the framework of their mandate, which is the resolution of the Nagorno Karabakh conflict,” said Gevorgyan. “I believe that at this juncture this is an important aspect to register.”