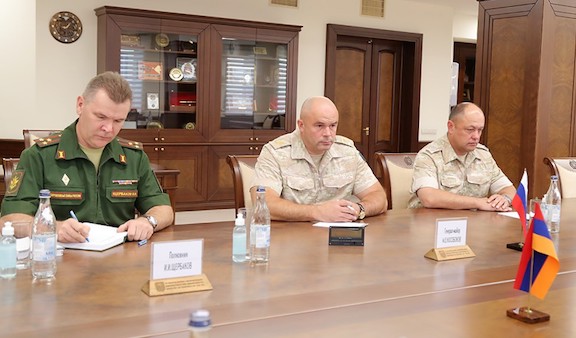 In congratulating Kosbokov, Karapetyan praised efforts aimed at stabilizing the military and political situation in the region and discussed the work of the Russian peacekeeping mission in Artsakh.

The defense minister stressed the importance of the Russian military base in Armenia and wished the newly-appointed commander of the base, Ovcharov, who was also recently appointed, success in his mission.

The military leaders also discussed regional security issues, among them the upcoming military exercises being held in Russia and Belarus.

Known as the West 2021 (Zapad-2021) strategic military exercises, the drills, which will be held in Russia and Belarus, kicked off on Thursday kicked off at the Mulino training grounds in Russia.

The Armenian military is also participating in the drills, together with military contingents from Russia, Belarus, India, Kazakhstan, Kyrgyzstan and Mongolia.

Russian Deputy Minister of Defense Nikolay Pankov said at the opening ceremony that the exercises will be an opportunity to develop universal approaches for combat readiness of troops, strengthen partnerships and form new traditions among soldiers.

He emphasized that West-2021 drills are solely defensive in nature.
Around 200,000 troops, 80 warplanes and gunships, up to 760 armored vehicles, missile and artillery systems, and 15 ships will be engaged in the exercises, which will be held on Russian and Belarusian territories from September 10 to 16.