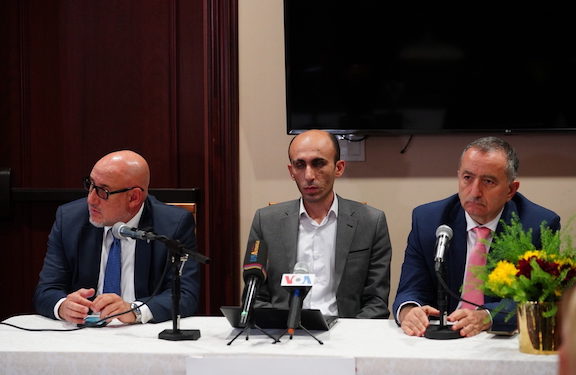 Artak Beglaryan, the State Minister of the Republic of Artsakh, on October 25 held a press conference followed by a keynote address at a public forum organized by the Pan-Armenian Council of Western United States, at the Armenian Society of Los Angeles Center, located in Glendale.

At the press conference, Beglaryan fielded questions from members of the print and television media. He was joined during the conference and public forum by Davit Akopyan, Chief Advisor to Beglaryan.

Zaven Khanjian, Executive Director and CEO of the Armenian Missionary Association of America, which had invited Beglaryan to the United States as the keynote speaker of its annual meeting and banquet, provided introductory remarks welcoming the State Minister, and explained his vital role during Artsakh’s recent history, particularly during the 2020 war of aggression brought on by Azerbaijan, and its aftermath.

During the hour-long press conference, moderated by Garo Ghazarian, attorney and co-host of the “Frontlines-Artsakh” program, Minister Beglaryan addressed a broad range of inquiries ranging from the plight of Armenian refugees and prisoners of war to accountability for the funds raised in the diaspora for humanitarian assistance to the Artsakh people.

From 2018 to 2020, Beglaryan served as the Human Rights Ombudsman of Artsakh, before being appointed to his current post as State Minister of the Republic.

Among those in attendance were Armenia’s Consul General to Los Angeles, Ambassador Dr. Armen Baibourtian, Glendale Police Chief Carl Povilaitis and the entire command staff of the Glendale Police Department, Lena Bozoyan, Chairwoman of the Pan-Armenian Council, and the leadership of the respective PAC members. The attendees toasted in honor of Minister Beglaryan, applauding his exemplary service to the Armenian people of Artsakh, and to the Armenian nation.

The program then continued in the grand hall of the Armenian Society Center where a capacity audience came to listen to Mr. Beglaryan’s remarks. Dr. Vahram Shemmassian, Director and Professor of the Armenian Studies Program at California State University, Northridge, opened the public forum by welcoming the audience and asking them to stand for the playing of the national anthems of the United States of America and the Republics of Armenia and Artsakh.

This was followed by a moment of silence in honor of all those who lost their lives last year during the war. Bozoyan then provided an inspiring welcoming address where she emphasized that the struggle for the liberation of Artsakh continues through Beglaryan’s tireless service and his fellow Artsakh citizens toward achievement of the national aspirations of the Armenian people.

In a moving presentation, Ghazarian then introduced Beglaryan by reciting a beautifully penned letter by his daughter Ani, who three years ago, at 17, had described the profound impact Beglaryan had on her and others of her generation, motivating her to seek a career devoted to public service and human rights.

Beglaryan then made his presentation. During the hour-long address, he offered the attendees an outline of his well-developed five-point plan for the future of Artsakh. He emphasized his vision as follows: Security of Artsakh’s borders and its people, education, economic development, repatriation and engagement in the civic life of Artsakh.

He emphasized that if someone calls themselves an Armenian, they must become a part of Artsakh’s life by living there or by offering their particular expertise in service to Artsakh. It is through such full engagement in Artsakh that internationally recognized statehood for the Republic will be achieved.

Beglaryan elaborated on each of these five points covering a broad range of topics from the role of Russian peacekeepers to the legal status of Artsakh. At the conclusion of his formal remarks, Beglaryan responded to approximately twenty questions from audience members, moderated by Ghazarian.

Beglaryan lost his eyesight as a child in 1995, when a landmine he found in his family’s yard exploded. His father had died in battle during the first Artsakh War of Liberation just two years earlier. He then lost his mother at the age of 16 and, it was then that Minister Beglaryan found his life’s purpose and mission.

Beglaryan had studied in Yerevan, at a school for the visually impaired from 1995-2006. Coming home during summer breaks, he had attended the AMAA Camp in Stepanakert and credits his Christian education there as the bedrock of his commitment to public service. He graduated from Yerevan State University in 2010, subsequently studied business management in Thessaloniki, Greece as part of a student exchange program, and took part in international programs and research fellowships in the Czech Republic and Switzerland. He holds a Master’s Degree from the University College London in political science, security, and integration, and he has completed a public policy and administration program in the U.S., at Tufts University, Fletcher School of Law and Diplomacy.

“We are so grateful to our very distinguished guest, Minister Artak Beglaryan, who gave our community a frank and thorough analysis of the developments in Artsakh during the past year and his plans for Artsakh going forward. We look forward with great anticipation to continue our work and support of Minister Beglaryan and the Armenians of Artsakh,” said Bozoyan.

The event was followed by a reception.