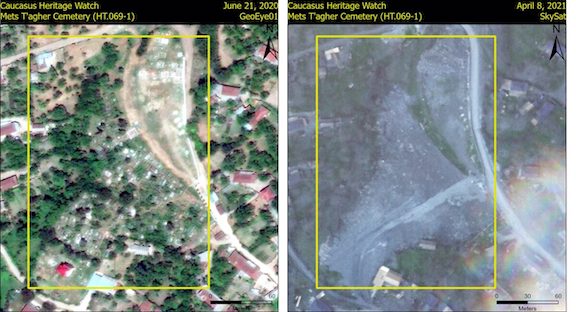 Artsakh Foreign Minister David Babayan accused Azerbaijanis of using Armenian gravestones as construction material, touching on what he called the “cultural genocide” being perpetrated by Azerbaijanis as they continue to destroy Armenian churches and other cultural sites in territories that fell under Baku’s control.

“This is another manifestation of cultural genocide and barbarism with a political aim. They are not only completely destroying any trace of Armenian identity, but they are also using it for economic purposes,” Babayan said in an interview with Artsakhpress, calling the destruction of Armenian sites a gross violation of international and moral norms.

Babayan said that according to various reports, the gravestones are being used for construction of te Hadrut-Shushi road.

“There is evidence showing that Azerbaijanis are demolishing the Hadrut cemetery. This information makes it necessary for the international community to carry out monitoring missions and become acquainted with the reality on the ground. It must be implemented by various government agencies. We have sent numerous letters to various international organizations regarding the Armenian cultural genocide committed by Azerbaijan. There is some progress,” added the Foreign Minister.

Last week, the Caucasus Heritage Watch published satellite photos showing that the Armenian cemetery in in Mets Tagher in Hadrut was destroyed.

Artsakh’s Human Rights Defender Gegham Stepanyan on Tuesday touched on that and echoed Foreign Minister’s Babayan’s concerns about the using materials from desecrated graves as construction material.
“The destruction of Armenian graves once again shows the widespread hatred and outrage of the Azerbaijani leadership and society toward the Armenian people, their history and heritage,” said Stepanyan.

“The aim of Azerbaijan’s criminal behavior is clear: to destroy any trace and evidence of the centuries-old existence of the Armenians in the occupied territories,” Stepanyan said in a Facebook post on Tuesday.

“The customary norms of international humanitarian law stipulate that the conflicting parties must show respect for the graves under their control, must separate the cemeteries with distinctive signs and ensure their preservation. By desecrating and destroying Armenian cemeteries, Azerbaijan grossly violates not only the norms of international law, but also the right to respect for one’s dignity, personal and family life,” added Stepanyan.

He emphasized that Azerbaijan must be forced to fulfill its international obligations, in which international organizations have a primary obligation and mission. “The crimes committed by Azerbaijan should not go unpunished, the international community should realize this,” added the Artsakh Human Rights Defender.