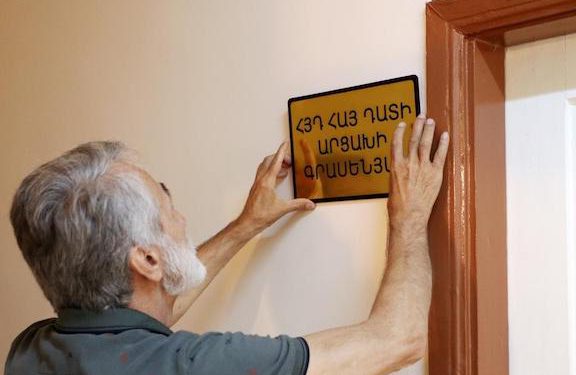 STEPANAKERT—The Armenian National Committee of Artsakh was officially inaugurated Thursday with its offices opening to advance the just aspirations of Artsakh and its people. The opening coincided with the 30th anniversary of Artsakh’s declaration of independence.

In his remarks, delivered via video, ARF Bureau Chairman Hagop Der Khachadourian explained that the ANC of Artsakh will reaffirm the commitment to garner international recognition of Artsakh and address the needs of the country following the 44-Day War.

“The tragedy and outcome of the 44-day war, unleashed by Azerbaijan and Turkey in the fall of 2020, certainly damaged our national spirit, but for the ARF this latest scourge in Artsakh is only a temporary setback,” said Der Khachadourian. “The Armenians of Artsakh, as well as the Armenian people in general, have the enormous potential to fight for Artsakh to rise, live in an independent and Armenian-inspired spirit and continue to develop until its reunification with mother Armenia,” added Der Khachadourian in his message.

He noted that today we are living in one of the crucial stages of our recent history, when we must overcome all the challenges ahead.

“But our will is unwavering and we are ready to invest all our capabilities and multiply our work for the cause of Artsakh,” said Der Khachadourian, adding that the opening of the ANC Artsakh office attests to that commitment to the commitment to the international recognition of the Artsakh Republic and to support the post-war needs of the people of Artsakh.

“At the same time, we send a message to the international community and Azerbaijan and its allies that despite the consequences of the 44-day war, we are ready to support the advancement of Artsakh and strengthen the Armenia-Artsakh-Diaspora bond,” added the ARF Bureau chairman.

Der Khachadourian explained that the ANC of Artsakh will work closely with all government bodies and structures in Artsakh and provide crucial information about Artsakh to the international community. It will also promote visits to Artsakh by various officials and help Armenians of Artsakh to expand friendship networks.

A video presentation highlighted messages from international friends of Artsakh, who not only congratulated the 30th anniversary of Artsakh’s independence, but also offered well wished to the Artsakh ANC.

The Artsakh ANC office will be headed by former Artsakh Foreign Minister Georgi Petrosian and will be locate in the Nikol Duman center in Stepanakert.