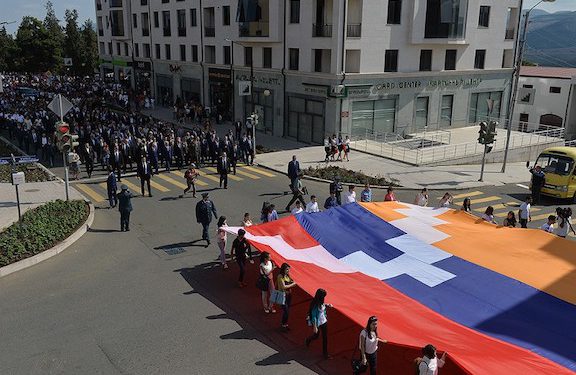 The leadership of Artsakh, including its parliament, voiced outrage at remarks made by Prime Minister Nikol Pashinyan, who on Friday called into question Artsakh’s independence, prompting Stepanakert officials to firmly protest statements that can jeopardize the right to self-determination of the people of Artsakh.

Since the beginning of the Karabakh Liberation Movement in 1988 there has not been such a standoff between the authorities of Artsakh and Armenia, with Pashinyan on Monday again doubling down on the assertions he made during a virtual press conference on Friday.

In his ongoing efforts of to deflect blame for the debilitating defeat of last year’s war, Pashinyan on Friday again blamed Armenia’s previous leaders for what he called mishandling of the negotiations. He also criticized the OSCE Minsk Group co-charing countries—the United States, Russia and France—for putting forth proposals in 2016 that he claimed diminished Artsakh’s status as an Armenian settlement and envisioned the restoration of control by Azerbaijan over Artsakh.

Furthermore, Pashinyan reiterated an earlier statement that a final status of Karabakh does not necessarily stipulate its independence, saying that the Minsk Group Co-chairs’ proposals “Artsakh could not have ended up being completely Armenian.”

“It was obvious during those negotiations that Artsakh is going to have both Armenian and Azerbaijani populations,” Pashinyan said.

These statements have prompted Artsakh President Arayik Harutyunyan to issue a statement, which was echoed in more blatant terms by an unanimous decision of the Artsakh Parliament on Monday.

The complete recognition of the right of the Armenians of Artsakh to self-determination cannot be doubted or conceded, President Harutyunyan said, adding that only Artsakh Republic leaders are authorized to speak on behalf of the people of Artsakh.

“The goal of the international recognition of Artsakh Republic’s Independence is our main objective, from which no government can afford to deviate. Therefore, the people and the authorities of Artsakh will never and in no way accept any status within Azerbaijan until our goal is achieved,” Harutyunyan said.

He added that there can be no return to the past, not only in terms of status, but also in terms of demographics.

“What kind of coexistence can we talk about, if Azerbaijan continues to feed its society with Armenophobia, to prepare it not for peace but for eviction of Armenians from Artsakh?” asked Harutyunyan. “Of course, we are in favor of a peaceful settlement of the conflict, we are ready to make efforts in that direction, but the vital rights, interests and demands of our people are not negotiable.”

“The territorial integrity of the Artsakh Republic must be restored at least in the territories where the Republic of Artsakh was proclaimed in 1991. Therefore, our occupied territories must be de-occupied; our compatriots must be able to return to their homes,” he added.

“As for the security of Artsakh, we will continue our efforts to strengthen the capabilities of the Defense Army, and the Russian peacekeeping troops must remain in Artsakh permanently and indefinitely until the final and just settlement of the conflict and the provision of additional international security guarantees,” Harutyunyan added.

Without referring to the details of the negotiation process in the past, he stated that “now the moment is much more decisive moment than ever. Therefore, we have no right to make mistakes, otherwise those mistakes can be fatal for Artsakh and Mother Armenia.”

“If any Armenian wants to support Artsakh, they must take into account the will and goals of the Armenians of Artsakh, otherwise they should simply not interfere,” added the Artsakh president.

“All authorities are temporary, but our goals and positions must be maintained firmly and and must be unshakable. Unity around our national values and goals is important, and, as I mentioned, the guiding principle for every Armenian and the government in the settlement of the Azerbaijani-Karabakh conflict must be the will and aspirations of the Armenians of Artsakh,” he added.

“The will and aspirations of the Armenians of Artsakh need to be inviolable and serve as a basis for supporting the homeland for every Armenian. There need to be specific goals, principles and red lines established on the basis of national interests, above any narrow and short-term interests, including the political situation in the country, and this concerns the political forces and figures in Artsakh, Armenia and the Armenian Diaspora, starting from me,” said Beglaryan

“Every Armenian who believes Artsakh needs to remain Armenian, has something to do, and he or she must first and foremost not harm, and must then support,” added Beglaryan.

The Artsakh Parliament on Monday delivered a terse—and unanimous—rebuke to Pashinyan, calling his statements dangerous. Below is the translated text of the statement.

Throughout the history of the Karabakh conflict, statements distorting the essence of the problem are periodically exaggerated, which complicate and confuse the process of a comprehensive and final settlement of the conflict, the parliament said.

We consider it inadmissible any statement by any political force and figure that casts doubt on or belittles the existence of the Republic of Artsakh and its future as an Armenian settlement. It is puzzling that the last such statement was made on December 24 by the Prime Minister of the Republic of Armenia, while answering questions from representatives of the media and public organizations.

The fate of Artsakh was not and will not be a monopoly of any political force. Representing the opinion and position of broad public and political circles of the Republic of Artsakh, we express our disagreement and indignation at a number of dangerous and distorted formulations and ideas voiced during the press conference.

Concern is also caused by the fact that against the backdrop of the achievements of the national liberation struggle of 1988—the Karabakh Movement—formulations are being voiced that cast doubt on the very existence of the Nagorno-Karabakh Republic (Republic of Artsakh), proclaimed on September 2, 1991 and formed in complete compliance with the norms of international law, as well as its long struggle to achieve international recognition.

The legal and political foundations of the Armenian representatives in the negotiation process in previous years and the protection of our national interests in this context did not enter into any contradiction with the positions of international structures and mediators.

The fact that the issue of the status of Nagorno-Karabakh has never been ignored in the proposals previously submitted by the mediators is confirmed by the explanations of the OSCE Minsk Group co-chairs.

Speculations about the working options discussed in the negotiation process over the years and a possible change in the format of the negotiations cause alarm and concern.

We consider unacceptable statements that question Artsakh’s Armenianness and emphasize the importance of the presence of possible external forces, which we reject and condemn, in memory of the thousands of Armenians who sacrificed their lives for the freedom and independence of Artsakh.

While respecting all victims of the Artsakh liberation struggle, we simultaneously express our gratitude to all Armenians, in particular to our compatriots from the Republic of Armenia, for standing with Artsakh and sharing in its suffering and hardships.

A Home Away from Homes