‘Artsakh Must Become Priority for All Armenians,’ Artsakh Parliament Declares 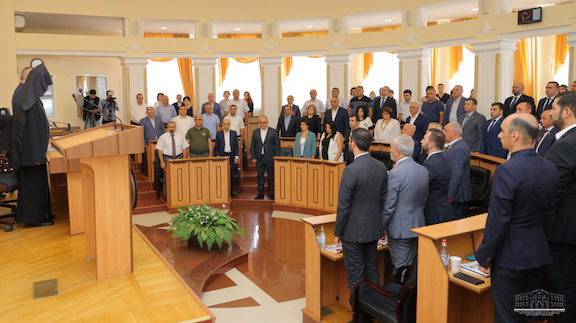 To mark the September 2 30th anniversary of Artsakh’s Declaration of Independence, the country’s parliament on Wednesday convened a special session during which the participants declared that Artsakh must become a priority for all Armenians.

The session was chaired by Artsakh Parliament Speaker Artur Tovmasyan and was attended by the Primate of the Artsakh Diocese, Bishop Vrtanes Abrahamyan; the parliament’s former speaker Ashot Ghulyan; as well as deputy speaker of Armenia’s National Assembly Ruben Rubinyan and members of Armenia’s opposition Armenia and I Have Honor alliances.

After observing a moment of silence in memory of the victims of all Karabakh wars, Tovmasyan said that the wars launched against Artsakh “reaffirmed Azerbaijan’s explicitly sinister plan of have an Artsakh without Armenians.”

“And after all this, to include the contentious issue of Artsakh having some kind of a status within Azerbaijan into the negotiations process simply is unhealthy logic,” Tovmasyan said. “Despite entirely different positions around the settlement of the Karabakh conflict between the sides, we are definitely inclined toward the establishment of a proper environment aimed at continuing the negotiations process exclusively under the auspices of the OSCE Minsk Group.”

“Independence is not merely a declaration. It isn’t only a Constitution. First and foremost it is the dignity to be able to live independently,” said Bishop Abrahamyan in his remarks.

In his remarks at the special session of parliament, Artsakh Foreign Minister David Babayan stressed that the establishment of the Republic of Artsakh was the logical outcome of the National-Liberation Movement—one of the most important pages in the history of the Armenian people and a clear manifestations of unity.

Garnering international recognition of Artsakh has been and will remain one of the basic directions of state-building and  foreign policy, said Babayan, who stressed the importance of maintaining the status of the Republic of Artsakh as a geopolitical factor and characterized the preservation of Artsakh and an Artsakh-centric environment as one of the most essential issues facing all Armenians. In this context, he emphasized the significance of continuous strengthening of the Armenia-Artsakh-Diaspora pillars.

“It is important that we celebrate this day. This is a message to our neighbors: the will of the Armenian people is unbreakable, regardless of turmoil we are able to recommit ourselves and overcome challenges. We are in common agreement: The security of Armenia is interlinked with Artsakh. We have very little time to accurately assess the situation and restore what has been lost,” said Armenian parliament opposition Armenia Alliance member Armen Rustamyan, who is also a member of the Armenian Revolutionary Federation Bureau.

“The future of our people was determined, is determined and will be determined in Artsakh,” said another of Armenia’s parliamentary opposition representative, Artur Vanetsyan, who is a member of the I Have Honor alliance.